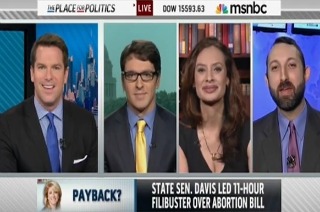 A panel of MSNBC regulars on Friday dug into the public opinion data surrounding how a Texas ban on abortion procedures after 20 weeks of gestation is being received and concluded that the Republican Party risks its very viability as a political party by supporting this measure… I’m kidding! They didn’t dig into any data. But they did agree – based primarily on that funny tingling sensation in the ol’ trick knee, one must surmise – that the GOP is largely doomed if they continue to back the nationally popular ban on abortions after 20 weeks.

The panel began by observing, correctly, that members of the Texas legislature who are asserting that state Sen. Wendy Davis (D-Fort Worth) should have to foot the costs of a special session of the legislature caused by her successful filibuster against the 20-week abortion ban in June are engaging in a ploy for publicity.

He is correct, but the panel regrettably did not stop there.

“Long term, nationally, the optics are terrible for the Republicans,” Scher continued. “If they care about winning the Senate in 2014 and care about 2016, they can’t be extending the war on women.”

He added that “obsessing” about a 20-week abortion ban which “punishes” women would likely doom the party’s political prospects far beyond the borders of the Lone Star State.

“What Wendy Davis is symptomatic, and so are the Castro brothers [Julian and Joaquín Castro], of is the changing face and demographics of Texas,” said Voto Latino President Maria Teresa Kumar, retreating to the safe, well-trodden ground of racial politics.

“It’s a matter they have to modernize in order to survive as a political party,” she concluded.

More Americans support maintaining legal abortion in all/most cases than do not, of course. But, according to opinion polling, the debate over whether to move back the established limit on abortions from 24 weeks to 20 weeks is a debate that has largely been concluded. For those opposed to a 20-week ban, it’s a debate they lost.

If scientifically accurate measurements of public opinion are your thing, then you will appreciate a Washington Post/ABC News poll published on July 26 that showed 56 percent of respondents approve of reducing the legal limit on abortions to 20 weeks. That includes 60 percent of women.

Lest you believe this poll to be an outlier, a Quinnipiac University poll released on Friday confirmed those results. A total of 55 percent of respondents told Quinnipiac pollsters that they approved of restricting abortions to 20 weeks. That figure includes a plurality of Democrats (46 – 44 percent), as well as a majority of men (50 percent) and, again, 60 percent of women.

In fact, that Quinnipiac poll found that the only group opposed a 20-week abortion ban were those voters who identified as having “no religion” whatsoever and self-described liberals. Every other subgroup approved of the measure.

But who needs data when you can adhere to mutually agreed conventional wisdom? That would just muddy the preset conclusions and biases that this panel segment was designed to confirm.