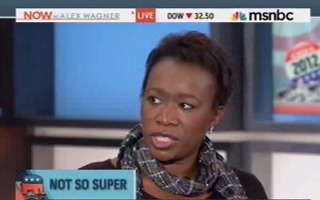 MSNBC contributor and managing editor Joy-Ann Reid took to the set of NOW on Thursday where she contended that Republican campaign spending actually boosted the economy briefly and helped President Barack Obama win reelection. The scale of this misunderstanding of the scope of the economy, and how capital investment generates growth, is a uniquely clarifying moment. For progressives who believe the economy is small enough that donation spending can boost the markets, that economy is small enough to be managed in a command and control structure.

Asked about the spending by pro-Republican groups this cycle which seemed to amount to little in the way of electoral gains, The Grio managing editor Joy-Ann Reid said that she thought that spending was a good thing.

“The conservatives Super PACs have proved that economic stimulus actually does work,” Reid said. “When you pump money into the economy – I mean, I think these television station groups did tremendously well with this spending. Printers and people who design direct mail.”

“So, ironically enough, their spending probably actually boosted the economy slightly, which actually, again, helped Barack Obama,” Reid added. “It was a mini-stimulus.”

First, this is a remarkable reversal from the Democratic position of just a few weeks ago, which steadfastly contended that the infusion of capital into politics that was unleashed by the Supreme Court’s decision in Citizens United would reduce opportunities for healthy political discourse.

Second, this belief betrays a stunning lack of understanding about the size and complexity of the American economy, let alone the global economy. If one held the belief that a grand total of approximately $2 billion in spending over the course of 18 months (funds raised exclusively from donations rather than yields from commerce and investment, no less) into consultancy firms and advertising can stimulate the economy, than that individual can also convince themselves that the economy is small enough to be competently managed from the top down.

As the Dow Jones Industrial Average sheds points and the markets express their fears that Obama’s second term will be characterized by tax increases, reduced capital spending and lost growth, I’m now certain Joy-Ann Reid has a convenient out if the White House begins to take too much heat: the end of the 2012 campaign produced an economic shock.

Here’s a free idea for The Grio’s editor: an endless campaign!