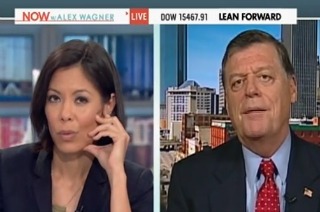 Rep. Tom Cole (R-OK) appeared on MSNBC’s Now with Alex Wagner on Thursday where he repeatedly reminded the panel guests that, in spite of claims and protestations to the contrary over the course of more than three years, the Patient Protection and Affordable Care Act of 2010 has never been popular. The MSNBC hosts and guests were frustrated that Cole would not admit that, after full implementation in 2014-2015, the law might eventually become popular.

Cole, an opponent of the plan advanced by some Republicans to shut down the government as a means of de-funding the law, shifted gears early in his interview by dismissing that internal GOP debate as being “tactical.” He noted that all Republicans agree with most of the country and some Democrats that the ACA as presently constituted is unworkable.

“This idea that somehow what the president has done is to put us in a box,” Cole said, “on the road to…”

“I think you guys put yourself in a box,” interrupted MSNBC host and former Democratic National Committee spokeswoman Karen Finney.

“I don’t think so. It is a bad law,” Cole replied. “And if it were a good law, the Democrats wouldn’t have lost the majority as decisively as they did in 2010, or would have certainly recaptured it when the president won the presidency in 2012.”

Wagner pressed Cole, noting that even some conservatives are afraid the ACA will become popular once it is fully in effect.

“You know, I’ve been hearing that for four years; that sooner or later it was gonna be popular,” Cole replied. “It’s never been popular.”

RELATED: GOP Governors Warn Republicans Against Government Shutdown: ‘How Much Blood’ Is Obamacare Worth?

Wagner turned to Medicaid expansion and asked if Cole was worried about the dynamic where one state might provide the expansion whereas a neighboring state would not. The GOP legislator shot back that the vast majority of states – 34 – have declined to participate in the Medicaid expansion. He said that he would not opine on what was a state issue.

“For some people it is life and death,” Finney said prefacing a question. “Why would the strategy not be to continue to work on making the law better instead of this ridiculous repeal?”

“At some point, is there not a moral obligation to people?” she asked

“Well, of course, there is a moral obligation to people,” Cole replied. “And if you think that the policies pursued are ultimately destructive, and self-defeating, and frankly bankrupting, then you have an obligation to continue to oppose.”