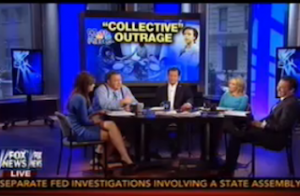 The conservative criticism of Melissa Harris-Perry‘s latest MSNBC promo came to a head on Fox News’ The Five this afternoon when the hosts held up the 30 second video as representing everything that is wrong with liberalism and the Democratic Party in American today. Broadening out the message in the promo about the “collective notion of these are our children” to accuse the rival network of promoting “socialism,” Eric Bolling declared that “MSNBC has declared war on the American fabric.”

Bolling continued railing against MSNBC, saying “from radicals like Al Sharpton to RINO’s like Morning Joe,” the network is “determined to change our life, our lifestyle, how we think, how we act.” In some ways actually echoing what Harris-Perry says in her promo about the “community,” he said that while “liberals are feeding a narrative state knows best cradle to grave, conservatives are feeding the narrative that the community knows best. And what’s at the center of the community? The family. You have a vast difference between the liberal MSNBC and the conservative rest of us.”

Meanwhile, Greg Gutfeld saw a curious “inconsistency” in what Harris-Perry said, asking if “children belong to the community, does that include the unborn?” He answered his own question, “Of course not.” Later Gutfeld called MSNBC’s decision to run the promo the “dumbest thing” they’ve done “since hiring Keith Olbermann.”

Liberal co-host Bob Beckel tried to defend Harris-Perry to some degree, but that wasn’t so easy with the four other hosts going so hard the other way. While he said he understood what she was trying to say about children being part of a larger community, he thought that “collective is a bad choice of words” because of that word’s association with socialism.

Aside from Beckel’s small attempts to explain a more benign interpretation of what Harris-Perry said in the promo, the other hosts mostly echoed what Glenn Beck, Rush Limbaugh and other critics of the video have been voicing since it first emerged over the weekend, only at a slightly louder volume.