RNC Rep Calls Out MSNBC Anchor On Romney Support: ‘I Know It Frustrates You’
Video

RNC Rep Calls Out MSNBC Anchor On Romney Support: ‘I Know It Frustrates You’ 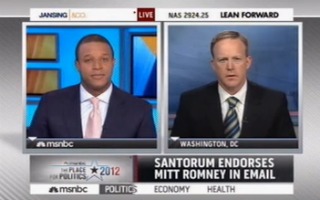 Sitting in for Chris Jansing on Tuesday morning, interim host Craig Melvin spoke with RNC communications director Sean Spicer about a trending topic poking fun at Mitt Romney‘s role (or, as the Democrats playing along on Twitter see it, a lack thereof) in the auto bailout. Romney, who had written an op-ed piece calling for what he described as a “managed bankruptcy” for the Detroit auto industry, yesterday said he deserves a lot of credit for the industry’s eventual recovery.

Spicer interpreted Romney’s comments as saying that President Barack Obama essentially followed the same plan he had put out in his op-ed piece.

“When you’re in politics,” Spicer explained, “two people go at it over a course of months, each person thinks that they would be better at a particular job. And then at the end, you know, we come together. I think there’s still — I think every one of our candidates is starting to line up behind Governor Romney. You’re seeing our enthusiasm gap in the political pol that came up yesterday. We’re up nine points over Democrats in terms of enthusiasm come November. There’s a lot of this, ‘oh, was it the best endorsement, how big was it?’ But, you know, at the end of the day, they’re all lining up behind Governor Romney.”

“With all due respect, Craig, you guys seem to be so focused on how quick and what words were exactly used,” Spicer responded. “The fact of the matter is that they’re all behind him, they’re all supporting him and the polling is showing that everyone in the Republican party is unified behind our nominee, getting ready to defeat Barack Obama in November. And I know that it frustrates you, but the facts are what they are. […] in 2008, the Vice President called the President some pretty bad things when they were campaigning against each other. The now-Secretary of State said some pretty nasty things. The head of the DNC was Hillary Clinton’s enforcer and yet it all came together and, somehow, when it happens on our side, it’s an analysis of, well, this endorsement happened at this time and it wasn’t used properly –”