MSNBC Host Grills GOP Rep On Same-Sex Marriage: ‘What If One Of Your Children Were Gay?’
video

MSNBC Host Grills GOP Rep On Same-Sex Marriage: ‘What If One Of Your Children Were Gay?’ 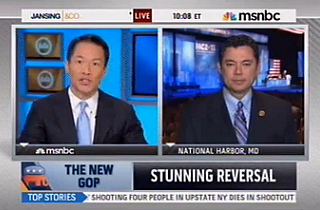 On MSNBC this morning, in the wake of GOP Sen. Rob Portman‘s position change to being pro-gay marriage due to his son’s coming out, fill-in host Richard Lui pressed GOP Rep. Jason Chaffetz (UT) over whether he’d consider changing his stance on same-sex marriage if he had a homosexual child himself.

In an op-ed piece in the Columbus Dispatch this morning, Sen. Portman reversed his stance on same-sex marriage, deeming it a result of his 21-year-old son’s coming out. He wrote: “We conservatives believe in personal liberty and minimal government interference in people’s lives. We also consider the family unit to be the fundamental building block of society. We should encourage people to make long-term commitments to each other.”

“When we look at that comment that was made by Senator Rob Portman and that revelation, do you think this will change the conversation?” Lui asked Rep. Chaffetz.

“Anybody who knows Rob Portman knows that he is sincere he’s honest he cares about his family he’s passionate,” Chaffetz replied. “I mean all of those positive things. And I know this is very heartfelt and he believes it. And gosh, more power to him. He believes really does this, and I respect him for it.”

Lui wanted to know whether Chaffetz believes Portman’s reversal will signal a sea change within the GOP on same-sex marriage.

“I still believe in traditional marriage, and I would remind my friends and colleagues who disagree with me, that it is interesting to me that those who advocate the most diversity and diversity of thought sometimes have a hard time with somebody that disagrees with them,” the congressman replied. “I just happen to believe in traditional marriage. That is where I’m at and what I believe in, and Rob Portman has changed his position, and I respect that. Jon Huntsman did the same thing.”

The MSNBC host pressed further, asking the Utah congressman, “And if one of your children were to be gay, you would not change your perspective is what you’re saying?”

“I would love them with all of my heart, all my heart, absolutely,” Chaffetz responded.

“But you would still not support marriage equality?” Lui asked.