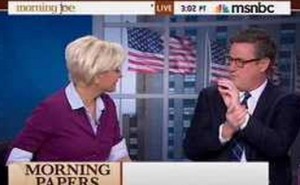 On Wednesday morning’s Morning Joe, host Joe Scarborough was doing a fine job of illustrating the dishonesty and capriciousness of the vendetta against Ambassador Susan Rice that’s being carried out by GOP Senate Power Trio John McCain, Lindsey Graham, and Kelly Ayotte, but just when it seemed like all was lost, and Republicans might actually get some good advice from Scarborough (which they would ignore anyway), he offered a suggestion. “There are so many ways to go after Susan Rice,” Scarborough said, beginning with “whether she even has the temperament to be Secretary of State.”

The segment began with a jokey evisceration of Tuesday’s closed-door meeting between the “Three Amigos” and Ambassador Rice, along with acting CIA Director Michael Morell. The meeting was supposed to be an opportunity for Amb. Rice to clear up any questions these three had about her Sept. 16 talk show appearances on the subject of the Benghazi attacks, in advance of Rice’s possible nomination to succeed Hillary Clinton as Secretary of State. Scarborough teed up the Amigos’ post-meeting reaction by noting the expectation of normal people that when someone admits a mistake, you accept that and move on, an expectation that McCain specifically promised to meet in advance of the meeting.

“Susan Rice goes to Capitol Hill and she says, ‘Hey, you know what, bad intel, I made a mistake, I’m sorry.'” Scarborough said. “I am glad that the people that are in my party on Capitol Hill have hearts as big as a Montana sky, because I’m sure they said, ‘Hey, it’s cool. We all make mistakes. All of us on Capitol Hill, we all make mistakes from time to time and it’s cool. So how did this work out after she said she was sorry?”

Shockingly, that’s not how it worked out, and the meeting left McCain and Co. “more disturbed” and “more troubled” than ever, which makes you wonder if Amb. Rice and Acting Director Morell answered their questions, or forced them to watch Two Girls, One Cup. Sen. Ayotte, for one, was shocked, shocked to learn that Amb. Rice “even said” that the information she gave on the morning of Sept. 16 was “wrong,” even though that was the entire point of the meeting.

This started the rest of the panel on an intermittent giggle fit, during which Game Change author John Heilemann joked that McCain had pulled Sen. Ayotte into his Rice posse because “they’re trying to recover from the War on Women.”

Scarborough laid into his fellow Republicans like an Ed Show panelist, pointing out the Condoleezza Rice hypocrisy, mocking the political wisdom of picking this fight with a woman of color after Republicans just lost an election in which women and people of color voted overwhelmingly against them, and even got in a shot at Mitt Romney* and his “stupid” press conference on Sept. 12.

“There are so many ways to go after Susan Rice,” Scarborough continued, adding “and there are real questions on whether she even has the temperament to be Secretary of State.”

(crickets of the universe chirp in unison)

“Let me say it again. Does Susan Rice have the temperament to be Secretary of State? There are a lot of people, Democrats who will tell you privately that just maybe she doesn’t. But we’re not talking about this. This is a clown show that’s going on right now.”

As apparently the only liberal with no interest in helping Republicans repair their political flux capacitor so they can get out of 1957, I wholeheartedly agree with Joe Scarborough, and then some. Instead of ignoring Ambassador Susan Rice’s impressive qualifications in favor of a ginned-up controversy, Republicans should ignore Susan Rice’s qualifications in favor of a ginned-up controversy and her “temperament,” and maybe they could also wonder how Rice will perform as Secretary of State and get dinner on the table at a reasonable hour.

*Mitt Romney was the Republican Party’s 2012 nominee for president.