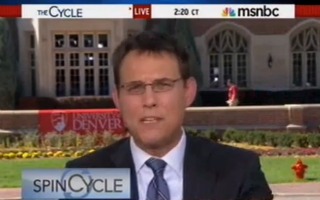 A 2007 tape of President Barack Obama speaking at a gathering at Hampton University where he attacked the Bush administration for their selective response to disasters and implied that the federal government cared less for victims of Hurricane Katrina because they were primarily African American continues to drive the political debate in the media. MSNBC’s hosts of The Cycle agreed that the video was largely inconsequential and would not impact the presidential election. Steve Kornacki took it a step further, however, arguing that those who promoted the video, particularly The Daily Caller and Matt Drudge, founder of The Drudge Report, should be “marginalized.”

MSNBC host Touré recapped a segment on Fox News Channel’s Hannity on Tuesday night in which Sean Hannity and Tucker Carlson criticized the tone of voice and Sothern affectation Obama employed during his 2007 speech. Touré called the criticism levied by “white men who don’t know the president” telling a black man how he should speak to an African American audience “disgusting.”

“I think this whole episode is worth highlighting, not obviously for the content, but because I hope – in a way – maybe this is the moment that we can all, kind of, agree to marginalize Matt Drudge,” said Kornacki. “I think we’ve given him, sort of, an outsized role in setting the agenda for news coverage.”

Kornacki said that people have learned at this point to be skeptical of big scoops teased by Drudge, but there was nevertheless a large amount of anticipation. “The reality with this guy is it’s always slanted,” Kornacki added. “It’s always pushing a very transparent agenda and it basically never adds up to anything.”

Kornacki concluded by saying that this episode resulted from a Republican strategy in 2010 that was successful in painting the president as a left-wing ideologue. Today, however, he says that most voters are “cheering” for the president and the Republican critique of the president does not match reality.