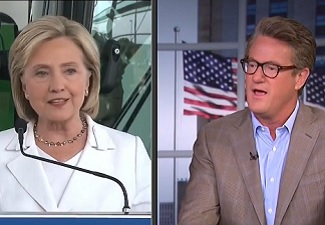 Whatever you think of the Clinton so-called email “scandal,” there can be little doubt that it fits right in with a deranged, decades-long campaign to paint former Secretary of State Hillary Clinton as a cross between Keyser Soze and Heisenberg. If you still somehow doubt this, then consider that the host of the Beltway’s most influential political news show actually said, out loud, that Hillary used the live on-air murders of two Virginia journalists to cover up… well, that part is unclear.

At issue were Wednesday remarks Hillary Clinton made in Iowa, in which she took a marginally more conciliatory tone toward the email issue:

“I know people have raised questions about my e-mail use and I understand why, I get it. So here’s what I want the American people to know. My use of personal e-mail was allowed by the State Department. It clearly wasn’t the best choice. I should have used two e-mails, one personal, one for work, and I take responsibility for that decision.”

Again, think what you will about the “scandal” — take Hillary’s sober tone with a grain of salt, if you’d like — but this was pretty clearly an attempt to make a dent in moving the trustworthiness numbers that have so many people worried.

Or, if you’re Morning Joe host Joe Scarborough, this is clearly an attempt by Clinton to cover up the email “scandal” with the corpses of the two journalists who were murdered on live television yesterday, because… well, just because:

“I hate to tell the truth, but I’m going to tell the truth. I’m going to say it on the air. The timing of this was suspect at best. When they knew that cable news networks would be 24/7 on a horrible news story. come on, you know it was planned to be dropped this way. This is how campaigns think.”

Well, he got one thing right, Joe Scarborough really does hate to tell the truth. After that, it’s nonsense because, as Mark Halperin pointed out, Hillary didn’t “drop” even a milligram of new information or admission. I’d like to give Halperin more credit here, but the appropriate response here is “Are you an insane person?” not “I disagree with you about the timing.”

But as Halperin also pointed out, the idea was for Clinton to evince a more serious attitude toward the story in an effort to move beyond the email issue, the entire point of which would be to let people know that she is taking a more serious and sober attitude toward the email issue. Scarborough is essentially accusing the Democratic candidate of trying to use the murders to distract people from the thing she really wants them to know, and/or things she has already said many times. It’s the answer to the question “Could God create a take so hot, it would burn Him?”

Beyond being really stupid, though, this is the kind of sick thinking you’d expect to find in the recesses of Alex Jones‘ comments section, not on the air of a major cable news network. This is the show that’s on every television in Washington, D.C., every morning, and its host just accused Hillary Clinton of political necrophilia. Scarborough should apologize, at the very least.