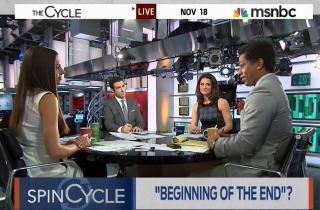 The hosts of MSNBC’s The Cycle took a moment on Monday to scold the pundit class for suggesting that President Barack Obama has entered into a cataclysmic tailspin that will result in nothing less than the discrediting of his presidency and liberalism itself. Sure, this strain of commentary verges on the hyperbolic, but you have to love how The Cycle made this point. They cited their fellow MSNBC hosts, among others, who carelessly predicted that the government shutdown would result in the discrediting of the GOP for the foreseeable future.

“We have very short memories,” Krystal Ball began. “It was only very recently that it was the, you know, the GOP civil war, and end of the Republican Party, and they were going to become regional party, and relegated to the dustbin of history.”

“Now Obama’s presidency is over and Democrats will lose the House and Senate,” she continued. “Everyone should just calm down a little bit.”

In order to make this point, she cited Fox News Channel contributor Laura Ingraham and two analysts on MSNBC’s Morning Joe – including Joe Scarborough himself – hand-wringing over the pickle in which the Grand Old Party had found itself during the shutdown. Even Ball got into the act, telling MSNBC anchor Alex Witt that the fact that GOP voters were “dispirited” with the party over their lack of fortitude during the shutdown, signaling that 2014 could be an uphill climb for the GOP.

Ball’s fellow The Cycle host, Ari Melber, went on to say that the president’s job approval may not be a drag on the party as much as some think. To prove this point, he observed Presidents George W. Bush and Lyndon Johnson had approximately the same approval rating at this point in their presidencies. Damning with faint praise, to be sure.

Furthermore, The Cycle hosts continued, Obama will not be on the top of the Democratic ticket next year, rendering talk of his relevance to the midterms an academic debate at best.

The Cycle hosts are half right. No, the GOP was never doomed by the shutdown. Don’t believe me? Ask the beatified polling analyst Nate Silver who took a look at the historical context of the government shutdown and found that, even with a dearth of data upon which to base sound conclusions, it was a near certainty that the media was overestimating the political impact that the transitory shutdown would have on the 2014 midterms.

The GOP brand certainly took a hit as the public’s perception of the party collapsed. It has not yet recovered but, being the out party, they can rely on some structural advantages heading into the midterm cycle.

While MSNBC’s Morning Joe was predicting doom for the GOP, a television program which has at various occasions deemed opposition to gun control, pro-life issues, and CPAC to all be Republican Party killers, many accomplished analysts were cautioning the media to take a more nuanced position on how the shutdown would impact 2014.

Compare this with the trajectory of the president’s average job approval rating, via Real Clear Politics, over the course of one month of sustained media coverage of the ACA’s implementation: 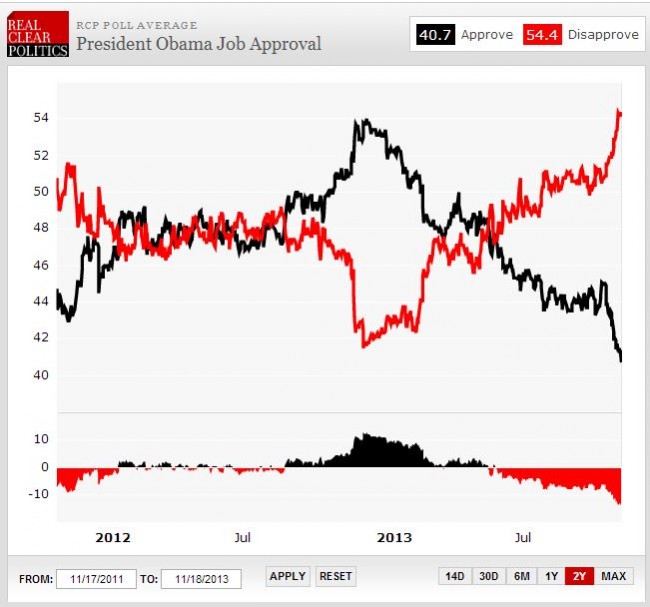 The president’s job approval has reached an all-time low with an average 54 percent of voters disapproving of the job he has done in office. As National Journal’s Alex Roarty capably demonstrates, once second term presidents enter this terminal slide in public approval, they almost never bounce back.

Likewise, the public’s approval of the health care reform law has also collapsed. While surveys registered a bump in the law’s approval rating over the course of the shutdown, which slight bounce has evaporated. Today, the law is nearing its all-time high disapproval rating. Mistrust in the law is as high as it has been since February, 2010. 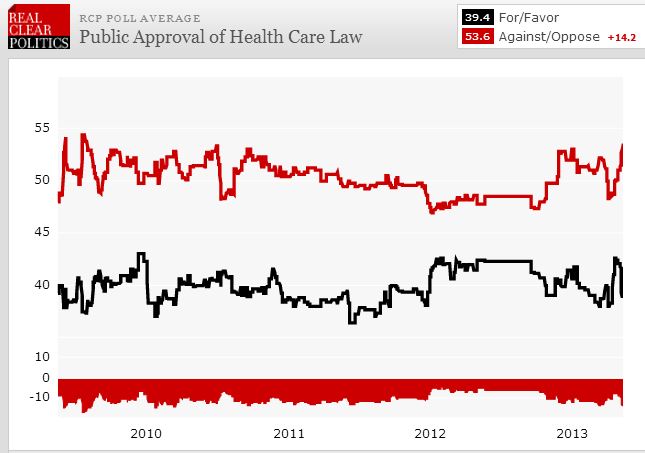 To The Cycle’s second point, that President Obama is not on the ballot in 2014 and, thus, his job approval rating does not matter, this is also misleading.

Yes, the president is not on the ballot. Yes, his job approval rating matters for 2014 probably more than any other single factor affecting how his party will perform at the polls.

This trend line produced by the Washington Post’s Chris Cillizza shows the direct relationship between a president’s public approval rating and the number of seats his party loses in a midterm election: 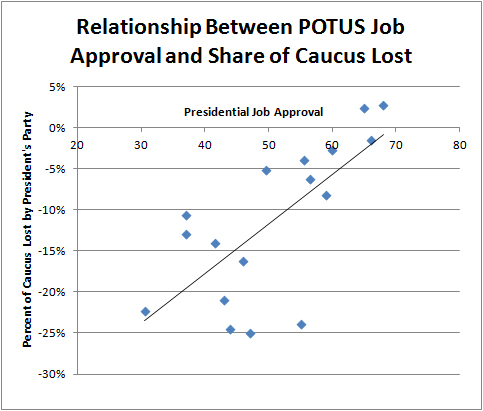 Finally, if all this evidence still makes you yawn and maybe mutter something along the lines of “It’s the economy, stupid” to yourself, Democratic partisans should still be concerned.

According to an Allstate/National Journal Heartland Monitor Poll released on Monday, just 11 percent of voters consider the economy to be “good” or “excellent.” Only 34 percent said that they believed the policies that Obama pursued when he first took office in 2009 helped “to avoid an even worse economic crisis, and are fueling economic recovery.”

Asked who they preferred to handle the nation’s economic challenges, voters chose Obama over Republicans in Congress by 36 to 33 percent, the smallest advantage on the issue he has had since the summer of 2011 – when America’s credit rating was downgraded for the first time in the nation’s history.

Much can change in one year’s time. The coming financial debates, a new debt ceiling increase, and still more ACA-related shocks could alter the political equation ahead of next November, but it is clear from the above data alone that the president is in deep trouble. No amount of cheerleading from the cable news desk will change this.