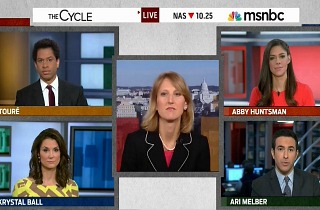 It has always been an intellectually bankrupt, lazy tactic, but it appears the MSNBC’s hosts are not even trying anymore when they attempt to tar Republicans as bigots and suggest this catchall explains all GOP behavior.

During a relatively dry segment on congressional Republicans blocking President Barack Obama’s judicial nominees, the hosts of The Cycle claimed that reason for this strategic decision was only skin deep. A handful of the president’s recently blocked nominees are either African-American or women. This fact having been established, the MSNBC hosts drew what they apparently believe to be the obvious conclusion. Within minutes, however, they apparently forgot that they issued this charge and contradicted themselves.

“Why are more judicial nominees facing these Republican filibusters?” Ari Melber asked at the top of the segment in question. “Well, let’s take a look at the last four the Republicans blocked to get on the D.C. Circuit Court of Appeals.”

Melber directed viewers to a graphic featuring pictures of the last four blocked nominees, three of whom were women and one an African-American. “Looking at those faces,” Melber continued. Now, let’s see. Why would GOP senators say these nominees don’t even deserve a vote?”

He said that advocacy groups like the National Organization for Women are charging that Republicans are actively blocking female appointments explicitly due to their gender. Neither Melber, nor any of his co-hosts, offered any skepticism about this point of view.

Fast forward a bit into the segment where Krystal Ball had an observation. “I think what’s so egregious here, too, is that Republicans – even before they knew who the nominees were going to be were indicating that they were going to block them,” Ball said.

But then, minutes later, we are treated to the observation that Republicans planned to reflexively block Obama’s judicial nominees before those nominees were even announced. Are they being preemptively racist and sexist? Wouldn’t that strategy appear quite silly if, say, Obama nominated to the Court a group of white, Protestant males?

They’re not even trying anymore. It’s instinctual to attack Republicans as racists and sexists. Even when the charge does not make any sense, they appeal to it like a religious rite – an anachronistic tradition designed to keep the social order intact and prove your bona fides as a tribe member than anything else.

But this tactic also debases the industry of punditry – an already rather shoddy profession in the eyes of many. There are quite a lot of things to be said of the GOP’s decision to block Obama’s court nominees, many of them unflattering. But accusing Republicans of blocking nominees because the party in Congress does not like their race or gender does MSNBC’s audience a disservice. The Cycle’s viewers have been misinformed. As a result, they understand the world around them that much less.

Watch the clip below via MNBC: