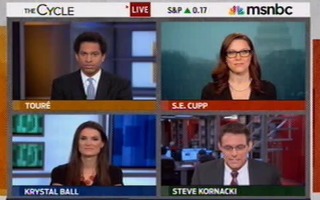 On Friday, MSNBC’s The Cycle investigated the outrage directed at cohost Steve Kornacki, as well as other journalists, for referring to President Barack Obama simply as “Obama” after the first reference. Seriously and without irony, this happened. And the hosts of The Cycle performed this auspicious duty without screaming obscenities or throwing objects into the cameras. It is a feat that I doubt I could replicate.

Kornacki says he was inundated by angry emails and tweets from the president’s supporters after he referred to Obama on the second reference as simply “Obama.”

Rather than dismiss this nonsensical and embarrassing zealotry off hand, he engaged his detractors in a reasoned way. He explained writing style, and how reporters and opinion writers – including those at the New York Times – will most often only use formal titles in the first reference to an individual. Thereafter, the person is most often simply referred to only by their last name.

Kornacki noted that many of the individuals criticizing him were African-American, and he likened their pride in the president to the pride shared by Irish and Catholic Americans in President John F. Kennedy.

Krystal Ball said that it was understandable that Obama’s supporters became incensed over the supposed slight by Kornacki because he has been so disproportionately disrespected compared to other presidents. She noted that she is also guilty of being overprotective of female officeholders, sometimes insisting that they be addressed by their full titles.

“We’re touching on something really deep here,” Touré opined. “[People] feel very defensive as well, because of the very racist – very nakedly racist — attacks on him that we see constantly.” He noted that the word policing was “silly,” but a sense of defensiveness about the “hatred” Obama faces is legitimate and justified.

Thankfully, S.E. Cupp added a bit of healthy skepticism into the conversation when she noted that the last president – and all the other 42 presidents who served before him – was generally treated with slightly less reverence in the press than their supporters believed they deserved.

Most certainly, no prior president has merited their own style guidelines when writing about them.