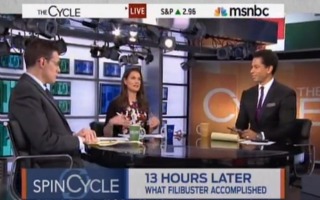 Two of the four hosts of MSNBC’s The Cycle mocked Sen. Rand Paul’s (R-KY) concerns about American citizens being killed by drones. Those concerns, prompted by a letter he received from the Justice Department indicating the White House believes it is within their legal authority to execute a drone strike in the U.S. against an American citizen, led Paul to filibuster the nomination of John Brennan to head the CIA on Wednesday. One MSNBC host said that Paul’s focus on this issue made the serious concerns that many Americans have about drones seem “absurd” and made him appear “crazy and on the fringe.”

“Rand Paul, by raising the specter of Americans sitting in cafés being struck down by U.S. drones, most people are not concerned about that,” said co-host Krystal Ball. “It seems crazy. It seems fringe.”

“Outside of the people who were already with him, I don’t think that he did a lot of convincing,” she added. “In fact, I think he made what is a very serious conversation seem sort of absurd, a bit crazy, and on the fringe.”

Touré agreed. He observed that “intellectual weight” was not required to engage conservatives in the media. “You can just say, ‘the president belongs in jail,’ and they’ll go ‘yes, that’s true,’” he said.

“Now, tonight, all Americans who are not at war with America can rest easy that they won’t be droned on American soil,” Touré added sarcastically. “So, thank you very much Sen. Paul for getting that cleared up.”