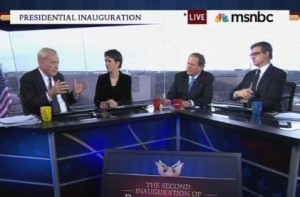 Following the completion of President Barack Obama’s second inaugural address, the hosts of MSNBC praised the president for delivering a “Lincoln-esque,” “progressive,” “forthrightly liberal” speech. In fact, two of MSNBC’s hosts expressed their surprise at the unabashedly liberal tone struck by President Obama in his address to the assembled crowd in Washington D.C.

“So much of Lincoln in that speech,” observed Chris Matthews. “He talked about the government that we want, which was education, infrastructure, regulation – all the good things. And then recognized that government can’t solve all the problems. I thought that was a reaching out, if you will. A shout at, eventually, the tea party-right that’s rejectionist.”

Matthews praised Obama for what he believed was the centerpiece of his speech – the declaration that Obama will do all he can to avoid a war with Iran over their accelerating nuclear program. Matthews said he thought that represented a dismissal of the neoconservative movement. “They hated what they just heard him say,” Matthews opined.

“I think this is one of the most progressive speeches President Obama has ever given,” Ed Schultz said in praise of the president. “I thought there was a real air of confidence brought forth by the president today when he said ‘we are made for this moment.’ He’s ready to move this country forward. It was really one of tremendous vision.”

Rachel Maddow praised the poets and performers who entertained the audience at the inauguration ceremony. “It feels like a very fresh, modern, patriotic moment,” Maddow said, specifically of Kelly Clarkson’s performance.

“I think it was as forthrightly liberal, progressive speech as we’ve seen from the president,” Chris Hayes said. He said he found Obama’s “invocation of Seneca Falls, Selma and Stonewall,” representing a diverse, multiracial coalition that propelled Obama to the presidency twice, to be powerful.

“It’s not just a demographic shout out, in a way, it’s a representation of how he got to be the nation’s first African-American president,” Maddow said in agreement.