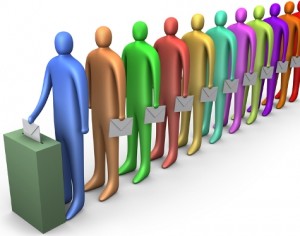 Yesterday, my colleague Noah Rothman pointed out that MSNBC has provided wall-to-wall coverage of new voter ID laws designed to depress Democratic turnout, while neglecting to publicize a poll showing that 74% of Americans support such measures. He’s absolutely right, if they haven’t reported on this poll, they really should, because it is the starkest proof of why these laws are wrong, and why decent Americans should oppose them. Literacy tests were popular, too.

In fact, if you worded the question properly, you could probably get a huge response to literacy tests even today, because it sounds reasonable to most people that you ought to be able to read and write in order to vote. Such a poll ignores the fact that literacy was not the point of literacy tests, any more than identifying voters is the point of voter ID laws. 74% of Americans don’t see why producing photo ID is a big deal because they have photo ID.

It’s actually a wonder the results weren’t more stark, since voter ID laws are expected to affect about 5 million people, less than 2% of the population. Plus, the people who are least likely to have the required ID are also least likely to be captured in a poll.

A similar effect was at play in the polling on Arizona’s “Papers Please” immigration laws, in which the number of people who supported asking people for their papers was almost exactly the same as the number of people who would never be asked for their papers. That’s why we have checks and balances in this country, to hopefully protect vulnerable minorities from the tyranny of the majority, a tyranny that isn’t always malicious, but simply borne out of a differing set of experiences. Breathing underwater polls really well in the ocean, but not everybody can do it.

However, some of it is malicious, so while we’re reporting on polls, let’s talk about a July 12 study from the University of Delaware, which showed that respondents were more likely to support voter ID laws if they harbored racial resentment:

…The survey reveals strong partisan and ideological divisions on racial resentment. Republicans and conservatives have the highest “racial resentment” scores, and Democrats and liberals have the lowest; Independents and moderates are in the middle. In addition, Democrats and liberals are least supportive of voter ID laws, whereas Republicans and conservatives are most supportive. The link between “racial resentment” and support for such laws persists even after controlling for the effects of partisanship, ideology, and a range of demographic variables.

That doesn’t mean that 74% of Americans (including 65% of black voters) harbor racial resentments; the University of Delaware’s David Wilson offers a few explanations for some of the more general support for these measures:

“Until they see specific media accounts of how these things can disenfranchise voters, people won’t know much about that argument,” Wilson said.

…“People are giving those who are pushing these laws the benefit of the doubt, because there must be a good reason for it,” Wilson said.

If you were to ask people if they favored restricting the voting rights of 5 million legally registered voters, in order to prevent something that never happens, you’d probably get a different result. The Washington Post poll also asked respondents if they thought voter ID laws were an effort to help one political party defeat another; they would have likely gotten a different result if they played respondents a tape of a Republican official bragging to that effect.

MSNBC’s decision to cover voter ID so heavily (and I’m pretty sure they reported the University of Delaware poll when it came out) is a fulfillment of journalism’s most sacred duty, to give voice to the voiceless. These poll numbers reflect that, and Noah Rothman is right, they should report them.