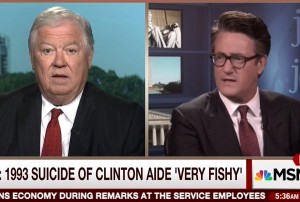 On Monday, The Washington Post reported on comments Donald Trump made surfacing the lunatic conspiracy theories surrounding the suicide of late Clinton confidante Vince Foster, a questionable move by the paper that I’ll get to in a minute. In the past, most media outlets would have been loath to print or disseminate a slanderous comment like that in any context, and for the most part, cable news has hewed to that standard, with one exception: MSNBC.

A responsible news outlet would not only avoid mentioning something so baseless and prejudicial, but would immediately correct any guest who blurted it out live, as radio host Glenn Beck did on CNN’s New Day Tuesday morning. Even though Beck was clearly deriding the conspiracy theory, host Alisyn Camerota circled back after his comments to correct the record:

Even Fox News has managed to resist referencing the allegation. Foster’s name was mentioned once Tuesday morning by a guest, who accurately described him as a “Clinton aide who committed suicide.”

Then there’s MSNBC, which referenced the Foster conspiracy theory 31 times Tuesday morning as of this writing, and not just on Morning Joe, but on four different shows. The Morning Joe crew dressed their constant repetition of “Vince Foster” and “murder” as mockery of the tactic and the story, but nevertheless repeated and amplified it over and over and over, culminating in the crystallizing moment in which host Joe Scarborough haughtily asked former Mississippi Governor Haley Barbour about the allegation, and got back exactly what this stealth promotional campaign was designed to elicit:

Scarborough: So let me ask you. Do you think Vince Foster was murdered by the Clinton?

Barbour: I have no idea and have no suspicion that’s the case.

Scarborough: That, sir, is the correct answer.

Barbour: But I don’t know.

Scarborough: You don’t even have to say, I don’t know.

When you are being outclassed journalistically by Glenn Beck and a Fox News guest, it’s time to delete your journalism account. This is exactly what Trump was looking for, sowing seeds of doubt, and MSNBC is gleefully complying.

But Barbour made an excellent point earlier in the interview, which is that The Washington Post is perhaps dirtier than anyone, including Trump, when it comes to promoting this crap. Here’s the key portion of their article, emphasis added:

When asked in an interview last week about the Foster case, Trump dealt with it as he has with many edgy topics — raising doubts about the official version of events even as he says he does not plan to talk about it on the campaign trail.

“He had intimate knowledge of what was going on,” Trump said, speaking of Foster’s relationship with the Clintons at the time. “He knew everything that was going on, and then all of a sudden he committed suicide.”

He added, “I don’t bring [Foster’s death] up because I don’t know enough to really discuss it. I will say there are people who continue to bring it up because they think it was absolutely a murder. I don’t do that because I don’t think it’s fair.”

That’s right, The Washington Post not only asked Trump about the conspiracy theories, they then characterized what actually did happen to Foster as “the official version of events.” They did that in their own voice. Imagine a reputable newspaper making a reference to the “official version of events” around the moon landing, or Elvis actually being dead. Journalism doesn’t get any more absurd than in the Age of Trump.