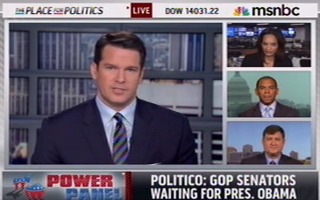 Following the conclusion of a news conference in which President Barack Obama criticized Congressional Republicans for not including a balance of tax increases and spending cuts in their plan to avoid the sequester, an MSNBC panel asked why the president does not invest time in building partnerships with his political opponents in Congress.

Roberts noted, however, that Obama said in his news conference that his door was open to Republicans. He asked why members of the GOP have not taken the president up on this offer.

“He’s the President of the United States and he must lead,” said Republican strategist Chip Saltsman. “He needs to go see them and build those personal relationships to get this done.”

Washington Post reporter Nia-Malika Henderson said that even some Democrats have expressed frustration at the president’s detached “style.” She said that Obama has relied on Vice President Joe Biden to cajole members of Congress into supporting legislative initiatives favored by the White House.

Democratic strategist Doug Thornell, however, said that Republicans are to blame for the lack of comity in Washington. He said that members of the opposition party are wary of being seen in public with the president or being known for being willing to compromise with Democrats because they become vulnerable to a primary challenge from the right.