MSNBC Panel Brawls Over Who to Blame for Obamacare Website Failure: Obama or GOP 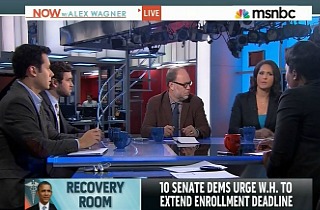 The guests and fill-in host on MSNBC’s Now tangled during a discussion over just which party was to blame for the failed roll-out of HealthCare.Gov. Some of the guests suggested that the White House was solely to blame and should be “held accountable” for their failure, lest they jeopardize the reputation of the project of expanding health care access to millions of uninsured. Other guests blamed Republican intransigence and sabotage for the website’s failures.

National Journal reporter Alex Seitz-Wald began by identifying a “cognitive dissonance” displayed by opponents of the ACA. He said that many have hampered its implementation and are now “screaming” that people are having a difficult time accessing the coverage portals like HealthCAre.Gov. He noted that state-level outlets that did not have to contend with congressional Republican disruption are faring far better than the federal exchanges website.

“And yet, the Republicans have been incredibly effective at turning the narrative 100 percent onto the website,” said fill-in host Joy-Ann Reid.

MSNBC host Karen Finney said that there is an “opportunity” there for Democrats to display outrage at the “morally disgusting” behavior displayed by Republican governors that refused to create state-level health insurance exchanges or expand Medicaid access.

Huffington Post reporter Sam Stein agreed that the federal government was burdened by the decision of some GOP governors to not create state-level exchange websites on their own. However, he added that the White House is getting a pass that they have not earned.

“They put a promise out to 7 million or so people who were supposed to buy insurance from the exchanges they would have access to this,” Stein said. “That they would get the medical coverage they needed and they have not delivered. And that is a fact.”

“The administration should be held accountable for that,” he continued. “And I will say this: it is creating an image for them that’s not a good one, which is that they cannot administer this president’s signature domestic achievement. I don’t think that’s an insignificant criticism.”

Finney agreed with Stein, but said she was not prepared to let Republicans off the hook for their “morally disgusting” decision to hinder the implementation of the ACA by not creating exchanges or expanding Medicaid.