MSNBC Panel Clashes over How ‘Nixonian’ IRS Scandal Is
VIDEO

MSNBC Panel Clashes over How ‘Nixonian’ IRS Scandal Is 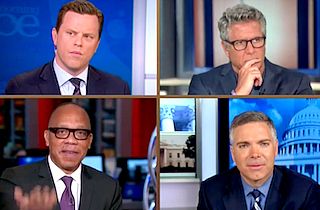 The Daily Caller’s Matt Lewis and Washington Post’s Eugene Robinson clashed on a very early Monday morning segment of Morning Joe over whether the controversy over the IRS’ alleged targeting of conservative groups crossed the threshold into the dreaded “Nixonian,” with Lewis highlighting the drama’s supposed similarities with Watergate shenanigans and Robinson basically calling him a goofball.

“Doesn’t it really feel Nixonian?” Lewis asked. “I wonder if Watergate happened today in a different media environment, and if Richard Nixon were a Democrat and we had this more fractured media environment where you couldn’t have had a couple of reporters beating the drum every day — maybe we are more apathetic but this should be outrageous to people, the possibility that a president is using the power of the IRS to target individuals –”

“Nixonian was Nixonian because Nixon had his hand on the button,” a less caffeinated Donny Deutsch countered. “I don’t think anybody, even the most whacked-out people, think President Obama is picking up the hot line in the Oval Office.”

“Find the initials ‘WH’ for White House written in Howard Hunt’s little notebook in this case and then you might have a point,” Robinson said. “But, in fact, that’s not the case. That’s never been demonstrated, and some bureaucrats at the IRS doing whatever they were doing is a big jump from that to any connection to the White House.”

“I’m not saying that Barack Obama ordered this,” Lewis replied. “But…then to this notion all of a sudden the evidence — the tape is missing, the missing however many minutes off the tape? I don’t know, maybe it’s just me. It seems a little frightening.”