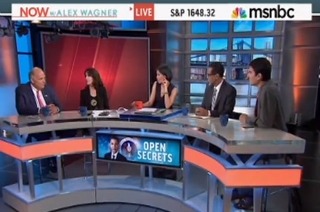 In what could easily be misconstrued as parody of a MSNBC segment, the panel guests on Tuesday’s edition of Now with Alex Wagner helped President Barack Obama clarify the difference between himself and former Vice President Dick Cheney – a comparison recently dismissed by the president though without much explanation as to why. The panel agreed that, while both Obama and Cheney perceive themselves to be “the smartest person in the room,” Obama probably is and Cheney is not. That gratuitous insult logged and recorded, the panel agreed that terrorism is a legitimate threat and perhaps the classified briefings that both men have been privy to are sobering enough to wash away ephemeral concerns about theoretical violations of privacy rights.

During a Monday night interview with CBS News host Charlie Rose, Obama rejected comparisons that are being made between himself and Cheney.

Recycling a series of hackneyed jokes that were past their prime four years ago, but which apparently still enjoy some traction with MSNBC’s core audience, Wagner and her guests mocked the Machiavellian Cheney as the “puppet master” of the feeble-minded President George W. Bush.

“In that room, he probably was,” Wagner zinged.

Yucks aside, folks, the panel moved on to the substantive issues facing both the Bush and Obama presidencies relating to national security threats.

Rendell said that progressives are being hypocritical by “soft peddling” their frustration with Obama’s embrace of Bush-era intelligence gathering programs. Wagner disagreed with this assertion before the rest of her panel guests slapped the host down and concurred with Rendell’s observation.

The panel then came to the consensus that the view from inside the Situation Room has a sobering effect on the occupant of the Oval Office – thus admitting that all the preamble mocking the Bush administration with a variety of belittling characterizations was merely a Pavlovian response to the name “Cheney” being invoked.

Clever and compelling stuff, to be sure.