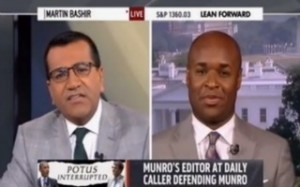 Martin Bashir hosted a panel segment on Tuesday discussing The Daily Caller reporter Neil Munro’s interruption of President Barack Obama’s press conference last Friday. One of MSNBC’s panel guests said that Munro’s question to Obama was indicative of his “white supremacist ideology” and opined that Munro’s question implied that he, an Irish immigrant, felt he was more “legitimate than a Hispanic immigrant” and that being white is itself more “mainstream.”

Bashir asked Washington Post columnist Jonathan Capehart for his opinion on Munro’s interruption of President Obama’s press conference. Bashir observed that Fox News contributor Bernard Goldberg joined in condemning Munro’s actions and noted that there appears to be bipartisan agreement that The Daily Caller reporter was out of bounds. Capehart agreed and said that Munro breached decorum by interrupting Obama:

“No one questions the right of an American, but particularly a journalist, asking the President of the United States a question,” said Capehart. “Where Neil Munro crossed the line by a mile is by questioning the president before he even finished speaking, one. And also yelling out a question where he knew questions wouldn’t be entertained.”

Bashir proceeded to interrupt Capehart in jest to the amusement of his panel guests.

“I guess being a jerk is sort of like pornography,” said MSNBC contributor Krystal Ball. “It’s hard to define, but when you see it you know it.” She said that there is a fine line that journalists walk between being an aggressive reporter and exhibiting disrespect.

Bashir then asked his guest, political analyst Edward Wyckoff Williams, for his opinion of Munro’s question to Obama, “Mr. President, why do you favor foreign workers over Americans?” Bashir asked if he agreed that “what he said is actually much worse than how he said it.”

“It’s much worse, replied Wyckoff Williams. “Particularly as a British-born person yourself, and I’ve lived in England for about eight years, I think it’s sort of disingenuous and sort of [a] cognitive dissonance example here of someone who is Irish and working in America, but somehow believes that he is more legitimate than a Hispanic who comes here as an immigrant.”

Wyckoff Williams went on to ascribe racial motives as the basis for Munro’s line of questioning. “I think that it speaks to, sort of, a white supremacist ideology,” said Wyckoff Williams. “This idea that somehow being white in and of itself is mainstream and somehow he is more deserving of being an American – even though he is foreign born – than the Hispanics and Asians and Africans who come seeking the American dream.”

Wyckoff Williams concluded by wishing that the mainstream media would adopt his point of view on that interpretation of events and criticize Munro’s actions from that angle.