MSNBC Panel Lectures Conservatives On The Nature Of ‘The Republican Brain’ 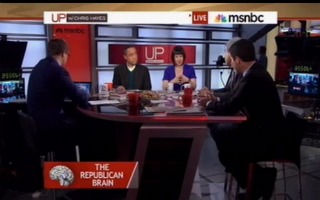 MSNBC’s Up with Chris Hayes hosted a panel discussion on Saturday about the nature of the “Republican brain” and why it seems, according to the intellectuals that populate weekend cable news programming, that conservatives reject scientific advances. What followed was a myopic, masturbatory, self-aggrandizing exercise in liberal “confirmation bias,” in a discussion on Republican’s supposed “confirmation bias.”

Hayes opened the panel with author of The Republican Brain, Chris Mooney, describing the findings in his book. He conceded that he found liberals have their biases, but the arch of history bends toward the truth on their side of the aisle. Conservatives, meanwhile, dig in their heels and reject new and potentially contradictory information.

Hayes was vexed by the scale of the problem, as it seemed to dawn on him that he was going to be largely unsuccessful over his career in winning conservative hearts and minds.

“How do we avoid a bleak landscape of will-to-power nihilism, in which no one can persuade anyone of anything and I come to work every day hoping to, like, you know, bring some information to the public and I completely bang my head against the wall and my life is meaningless,” Hayes asked, one would have to imagine, rhetorically. Fortunately, he went to break before his fawning panel could respond to this ego-stroking lament.

After the break, Hayes asked a leading, 47-second question about the nature of the “enlightenment project” – the magnum opus in which one presumes he believes himself to be engaging.

Author of The Righteous Mind, Jonathan Haidt, told Hayes that science is based on premises being challenged and tested and eventually confirmed or discarded. So, science and understanding evolves overtime whereas religion tends to avoid that level of critical introspection. Conservatives, they say, for the most part reject this process.

Finally, the brilliant and entertaining New York Daily News columnist John McWhorter chimed in and challenged the presumption of the theory of evolution from an atheist’s perspective. He said he had engaged the scientific community recently and asked how they would account for what he suggested were the holes in the theory that do not account for grand jumps in biological advancements. Shockingly, he found that the liberal scientific community – which perceives itself to be the pinnacle of open-mindedness – was rather unaccepting of his heretical questioning of what is presumed to be, and this is the appropriate term, gospel.

“The liberal scientists thought that I was the worst thing,” said McWhorter. “This was the kind of behavior that is associated with conservatives. There was a circling of the wagons, not reason, because I was trying to make sense – I wasn’t making a godly argument – that happened. It’s over. But, it leads me to think that this is perhaps human behavior.”

His thought provoking question was immediately shot down — Mooney told McWhorter that he was injecting god into the conversation whether he knew it or not. DailyBeast columnist Michelle Goldberg told McWhorter that he was contradicting science and that, in fact, his presumption that there are instances when the evolutionary theory is not entirely explanatory were factually incorrect.

So, McWhorter was both willfully spouting misinfromation and was buying into religious propaganda. And suddenly, there is no critical thought required. Phew! That was close.

What McWhorter admirably attempted to do was provoke actual discussion – even potentially contentious discussion. The panel’s immediate revulsion to his attempt to impose some level of objectivity on his fellow panelists confirms the findings in a much-discussed Pew Center poll from March which showed that the average liberal is twice as likely to block material online that they find politically disagreeable than conservatives. Those close-minded right-wingers actually seek out information and opinion that challenges their beliefs more than liberals. Who knew? Well, probably John McWhorter.

“The mistake you made was to talk to the devil,” said Haidt. “A principle in my book is to follow the sacredness, and around it you’ll find a ring of motivated ignorance.” Gosh, that does sound so enlightening.

Haidt said that the scientist in question, who McWhorter cited when asking his genuinely curious question of the scientific community, “was not a respected scientist, so you basically committed treason by even just talking to him.”

Gotcha. So, religious conservatives are ignorant and closed-minded but liberals, who are enlightened opinion leaders, suggest that even talking to people you don’t agree with amounts to “treason.”

Hayes concluded the panel saying that he drew the line at opponents of the theory of anthropogenic climate change, and would not have those heretics on his show. He said it was a dangerous philosophy to espouse… And we’re the ones who get lectured on “confirmation bias.”

Look, religious conservatives (or rather, religious people of all political stripes) take certain tenets of their faith literally. Some sects accept evolution, some do not. But the issue has become politicized and the discussion is no longer about the science on either side of the aisle. On the right, the issue serves as a coalescing force that draws like-minded individuals together. Guess what? It’s precisely the same on the other side of the aisle. And when they get together, they have the same conversation about how awful the other side is using practically the same parlance.

This is not the case for everyone, of course. Most people accept evolution as science, and the majority of conservatives and liberals who accept evolution do not see this as a sign of their moral and intellectual superiority. But many on this panel appeared to view the acceptance of this scientific theory as evidence that they are imbued with some form of higher consciousness. Hey progressives, how do you think those religious conservatives who reject evolution feel about themselves and their faith? How much you want to bet they feel the precise same way?