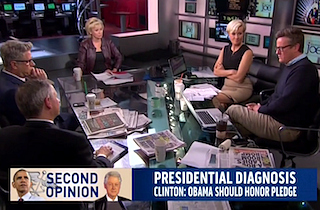 A Morning Joe panel Wednesday morning argued that President Barack Obama’s biography worked against his ability to effect a “course correction” to the dysfunctional Affordable Care Act rollout, and that instead his self-reliance will work against him by convincing him to dig in his heels on process.

“Do we have anything in Obama’s life where he’s been able to do a course correction?” guest and historian Jon Meacham asked. “And is there anything in his life experience, which is something that’s important to all of us, naturally—but he’s so much a candidate of biography?”

“I can’t really think of anything and, in part, it’s because, you know, he got to the White House, relatively speaking, without a lot of the struggles that other presidential candidates have had,” host Joe Scarborough said. Scarborough contrasted Obama’s career to Bill Clinton’s, in which the latter had to claw his way into the Arkansas governor’s mansion twice, and successfully tamed a GOP House by triangulating on major issues. “Bill Clinton was constantly having to remake himself.”

“My fear is the biographical impulse is the opposite,” Meacham said. “That having to raise himself, having to be so self-reliant—the father gone, the mother [passed]—what his first forty-four years taught him is that if he relies on himself, he’ll do well. He becomes the President of the United States when he’s forty-six year old. That psychological makeup leads to—”

“‘I’m going to count on me and nobody else,'” guest Donny Deutsch finished.