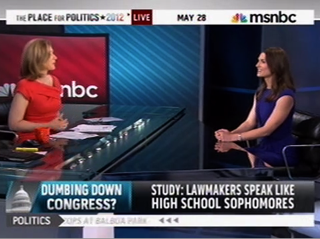 A study released last week of the vocabulary and sentence structure of Congressional floor speeches had some information in it that was troubling for many: the average Congressman speaks at the literacy rate of a high school sophomore. On MSNBC today, Chris Jansing‘s panel put up a fair argument for why this is happening and why it is okay– when the general public is the audience, making complex issues accessible is key.

Jansing began by asking panelist Krystal Ball whether the change was an indication that Congress was “dumber, or more populist?” Ball thought the key to understand the change was “who the audience is”: in the past, “Congress was the audience,” as the members attempted to convince each other to change their votes. “Now they are thinking, ‘this is going to go out in a YouTube video.'”

Panelist David Winston argued that the change in vocabulary was not a bad sign. “You’re dealing with fairly complex ideas,” he argued, “communicating ideas in a complex way is probably not a good strategy.” Jansing also noted that many of the lowest-ranking members of Congress were also highly educated, many with doctorates: “it’s not like these folks are dumb.” Ball noted that some– particularly lowest-ranking Rep. Mike Mulvaney— “wear it as a badge of honor,” as it makes them more approachable to their constituency. “More and more the audience is the public,” she noted. Winston agreed, citing the famous quote, “sorry this letter is so long, I didn’t have time to make it shorter.”