MSNBC Panel on Obama Admin.: ‘So Worried About Spin, They Created Own PR Problem’ 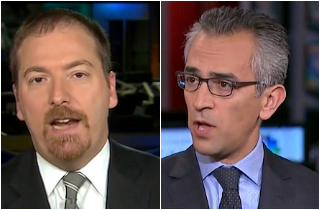 “They had this image, this myth, that they were the no drama team, that they were supremely well-managed, and that was true in the first campaign,” Wolffe said. “If you look at the management operation of the campaign, second time around: very different, extremely messy. You look at the management in government, very messy. It’s been very hard for them to do anything without moving out of this very closed inner circle. So there’s a follow-through problem, there’s a management question here. There is also a mythmaking question, which is to say: very successful in projecting an image, but ultimately, if that image doesn’t stack up to reality, you will get found out.”

Todd said that “mythmaking” had been the word he’d been searching for to describe the administration’s problems.

“They were so worried about the image and the spin, that they’ve ended up creating their own PR problem,” Todd continued. “This problem they’re dealing with right now is of their own making. They easily could have come out and said, ‘This is going to be very difficult. This is going to be very complicated. For most Americans, you will not notice. But for the 20% of Americans that have had cruddy health care coverage for years, this transition is going to seem scary to you. We’re going to do everything we can to make it less scary.’ Say something like that! You buy time, you buy the public’s patience, and it’s more honest.”