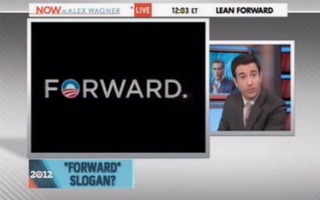 President Obama revealed his new reelection campaign slogan on Monday: “Forward.” On Now with Alex Wagner, the MSNBC panel dissected the latest shift in messaging from the Obama campaign and praised the contextualizing nature of the theme. Wagner described it as a “look back, but an emphasis towards the future.”

“Team Obama is certainly trying to put things in context and in order to od that you do have to look backwards to a certain degree,” said Wagner. She went on to play a portion of a seven-minute video from the Obama campaign that showcases precisely how bad the economic crunch was at the end of 2008, creating juxtaposition between the depth of the recession at its height and the relative recovery today.

Wagner turned to The Nation columnist Ari Melber, asking him to weigh in on President Obama’s new slogan, “Forward, and the new campaign strategy which Wagner says includes a “look back, but an emphasis towards the future.”

“The rational mind looks at that video and says, here’s that counterfactual historical argument about what might have been if you had a different response,” said Melber. “And the President’s response was the best under the circumstances.”

Melber went on to say that there is also an emotional calculation to this slogan and to the election. “The emotional response is: be very afraid,” said Melber. “It’s economic fear. We’ve had other elections on security fear and the fear there is suggesting the idea that the Republican party of Mitt Romney are not looking out for you.”

Wagner says that the Romney campaign is floating their intention to shift away from “red meat conservative issues” and more towards general election themes. Wagner says, however, that Republicans on the state and local level are not helping Romney stay on message.

“What a surprise that he’s not coming out for mandatory ultrasounds weekly for women,” said author and Mother Jones columnist David Corn. He recounts for the panel the Obama teams shifting message on Romney, in which the former governor is at once a “flip flopper without core” but also described himself as “severely conservative.”

“So reminding people that he’s severely conservative, while being a flip flopper – only Mitt Romney can achieve this – is a good strategy for [the Obama reelection team],” Corn concluded.