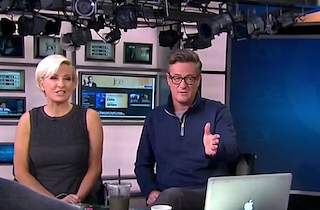 On Monday morning, a Morning Joe panel rejected the refrain of those defending President Barack Obama’s pledge that Obamacare would not affect those who wanted to keep their insurance plans, arguing that the “small sliver” of the population that would lose their insurance was still composed of millions of people who would be disadvantaged.

“Yes, there 15% of Americans who are uninsured, and this law could be a good thing for them,” co-host Willie Geist said. “80% employer insurance—they’ll be okay. But when I hear the dismissal of 5%—that is 14 million Americans. So if any percentage of that group is having its insurance canceled, and then having to go out and find insurance—which in many cases has higher premiums or higher deductibles—that’s a terrible thing, and that’s a lot of people. So let’s not say, ‘It’s 5%, it’s a tiny sliver.'”

“But even as some people admit that it was a contradiction, or perhaps a lie, they’re saying, ‘Yeah, but it’s a small sliver,'” Geist said. “That’s a lot of Americans.”

“That has been the back-up position: ‘Yes, it was a lie, but a small lie,'” host Joe Scarborough said. “Not for the people out there that are going to die because of this. You read this heartbreaking column [in the Wall Street Journal] of this woman who fought stage-4 cancer, and is now going to have to be kicked off of her plan, and not have the team that kept her alive.”

“And who in communications doesn’t know that won’t explode as a story?” host Mika Brzezinski said. “I don’t get that.”