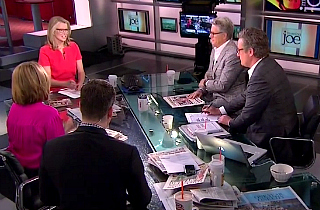 On Morning Joe Tuesday morning, the panel considered the Cliven Bundy scandal, in which a rancher who has refused two decades’ worth of court orders to pay land grazing fees to the government for his use of public land mounted a standoff against the U.S. Bureau of Land Management. Host Joe Scarborough said that the BLM could have handled this much better, but that those criticizing the government needed to criticize Bundy as well.

“If you had the idea anyone that has cattle could just let them off grazing anywhere, it’s not libertarianism,” MJ-regular Katty Kay said. “It’s anarchy.”

“For some reason this guy thinks that the laws that apply to every other rancher in the United States of America don’t apply to him,” Scarborough said. “Even people on the further boundaries of the right and the conservative movement think that if this guy is going to use federal land, then this guy should actually pay the fees.”

“There’s no doubt the Bureau of Land Management overreacted,” Scarborough added. “This could have been handled much better…You don’t go around tasing people or sticking guns in people’s faces. But at the same time I would like to hear some people that are criticizing the Bureau of Land Management also suggest to this man he does what every other rancher in the United States of America does.”