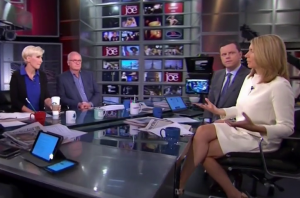 The panel of MSNBC’s Morning Joe tore into former Secretary of State Hillary Clinton after she turned her private email sever over the government after two top secret emails were found to have been stored on her email.

“Politically, it’s a no-win situation for her,” Bloomberg Politics’ Mark Halperin said. “If they recover the information from the emails, the 30,000 personal ones, I think it’s almost certainly the case that someone will find something that should have been turned over, and that would be a problem for her.”

“If it’s been fully deleted and permanently erased… I think people will say, ‘Wow, why did Hillary Clinton go to such length to permanently delete the e-mails?’” he continued. “And the question will linger forever, what was on there?”

Republican strategist Nicole Wallace agreed, and slammed Clinton’s “cumulative string of dishonesty” and desperate excuses. “I just think they’re down the rabbit hole of now squandering of whatever is left of the general public’s trust.”

Contributor Mike Barncile said the emails were indeed a problem, but the larger problem was the scandal “regurgitates” all the public’s worries about the Clintons. “Hillary Clinton, it’s quite obvious thus far her candidacy, too much of it has been about the past.”

The panel also ripped Clinton for framing the inquiry into her emails as a partisan issue, even though she was being investigated by Obama appointees.“I have to say, that feels condescending” host Mika Brzezinski said.