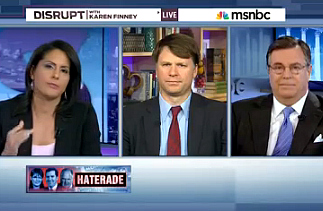 A panel on MSNBC’s Disrupt Sunday afternoon discussed the industry surrounding the “othering” of President Barack Obama, everything from claims that he’s a Muslim to a socialist to a Kenyan to the antichrist, that they said builds from chain emails to Fox News to undermine the legitimacy of the president.

“It’s not just a political machine,” host Karen Finney said. “It’s an industry. You can literally follow the lies through the conservative networks and by the time the latest lie or conspiracy theory is touted as fact on Fox, it’s merely reinforcing a mythology that’s already been absorbed by its viewers and true believers for years.”

“I don’t think there’s any question that there is an infrastructure that keeps the myths alive,” Democratic strategist Joe McClean said. “The hatred probably springs from fear. America is changing very rapidly in ways that make people of a certain age very uncomfortable. And they feel that their world is swinging out of their control, and there’s nothing they can do about it. The tea party zealots who are taking advantage of this fear and this hatred that it’s caused, profess to believe that America teeters on the brink of destruction.”

“The idea that the nation stands on the brink of destruction is a very old idea, and it runs back and forms part of the cultural roots of our civilization,” McClean continued. “The tea party isn’t necessarily made up of the Christian right. But a lot of the energy, a lot of the animus in the tea party springs from the Christian right. Their rhetoric just rings with these religious overtones. I call these folks, particularly people like Ted Cruz and Michele Bachmann and Sarah Palin, I call them the new American apocalyptic prophets. They’re prophesying the destruction of America, unless the son of man comes in his glory to save them, and they are casting Barack Obama in the role of the antichrist.”

“Lots of people in America were raised in Christian homes,” he said. “They read the Book of Revelation in Sunday School. So these terms resonate with them very deeply.”