MSNBC Panel: Willing to Take Obama ‘At His Word’ He Was Unaware of Extensive Spying Programs 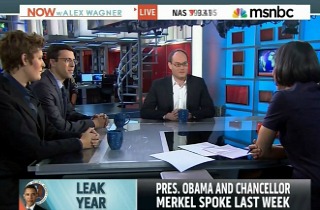 An MSNBC panel examined the claims made by some anonymous administration officials over the weekend who claimed that President Barack Obama was entirely unaware of a National Security Agency program which monitored the telephonic communications of 35 heads of state. The panel agreed that they were willing to take Obama “at his word” and will await his response after being informed of the scope of these spying programs.

An official told WSJ reporters that “it would not have been practical” to brief the president on all of them, specifically one in question which targeted the personal communications of world leaders. They added that the president does not “sign off on this stuff,” but that protocol is under review.

New York Times reporter Peter Baker wondered aloud how much plausible deniability was involved in the NSA’s admissions to the press and how much was political cover. He said that the president’s reaction to this news in the coming days will be informative. “Does he find this kind of disturbing that he wasn’t told about it? Does somebody lose a job as a result?” Baker asked.

“I kind of take the president at his word about this,” said The New Republic editor Franklin Foer. “Just given the scope of how much information was getting vacuumed up.

“If the president did not know that we were vacuuming up calls and information from our closest allies, then the thing really, really, has spun completely out of control,” Foer concluded.