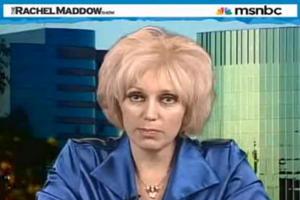 Orly Taitz became a household name by using whatever spare time she had from her careers as a dentist, lawyer, and real estate agent to file frivolous lawsuits against Barack Obama, on account of his being from the Kenyan province of Indonesia. She decided to make a run for California Secretary of State as a GOP primary candidate, and lost yesterday by nearly 50%. If you were watching MSNBC last night, those numbers might shock you, because for a minute there, it seemed like everyone on MSNBC prime time saw Taitz as a viable threat.

All three of their primetime programs dedicated some time to Taitz’s campaign and the possible repercussions of the Republican Party. None was quite as concerned as Chris Matthews, who took a great deal of time to emphasize what a victory for her would mean about the character of the GOP:


In the next hour, Keith Olbermann discussed Taitz’s chances with Lawrence O’Donnell in a much more playful manner, who, as a California resident, said it was certainly possible “only in California,” partly due to the fact that no one ever campaigns for that position, and Taitz tried to do so, as meek as that attempt was:

Then it was Rachel Maddow‘s turn to, slightly less enthusiastically, note that “it is conceivable that Orly Taitz could win this race”:

The only other media outlets to give Taitz this much attention were political satire blogs and Taitz’s official webpage— MSNBC made a conscious effort last night to talk about the possibility of Taitz officially joining the Republican party. Why give her the attention? Well, there’s the fact that, to a certain extent, Taitz is a creation of MSNBC itself. She may have picked herself up by her bootstraps, but it wasn’t until she engaged in a barely-intelligible shoutfest with David Shuster last year that anyone noticed her. And from that appearance was born a dozen hilarious posts across the blogosphere, one-woman protests, personal embarrassments, and a California Secretary of State campaign. But, for the most part– WorldNetDaily notwithstanding— the birthers have been rejected by both leaders of the Tea Party movement and major right-wing figures like Glenn Beck and the American right in general.

Over at Hot Air, Ed Morrissey notes the recurring Taitz references on MSNBC and notes that there was never a serious chance of Taitz winning: “No one I’ve read took Taitz’ campaign seriously — not this campaign, nor her Birther campaign, either.  And for good reason; except for the fact that she was first on the ballot, Taitz had little else going for her.” But perhaps for a laugh, there was a larger turnout than expected: Over at the Washington Post, Dave Weigel described the results as “disturbingly high, but nowhere close to a majority,” comparing her numbers to Democratic Senate candidate/blogger Mickey Kaus.

Perhaps all three hosts made a big fuss about her because, let’s face it, she makes for great TV– and she has made for better TV for MSNBC than anyone else. Or perhaps they genuinely believed it was possible she could pull through. Either way, the Taitz triple-headed gave the night a strange narrative, that the fringe was taking over, while moderates like Alvin Greene Blanche Lincoln were the real victors of the night.