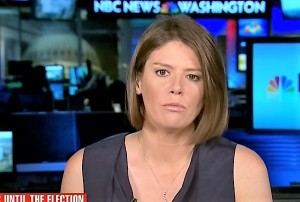 In a week that saw NBC “Commander-in-Chief Forum” moderator Matt Lauer allow Republican presidential nominee Donald Trump to rattle off lie after lie without so much as an “ahem,” and after a campaign that has seen more outrageous statements from Trump than a Mexican rapist can shake a stick at, Hillary Clinton is being called out for saying that roughly half of Donald Trump’s supporters are deplorable racists and xenophobes.

In fact, MSNBC Clinton beat reporter Kasie Hunt took it upon herself to “fact-check” Hillary’s statement Saturday morning, and then compared this statement to other catastrophic gaffes like President Obama’s “cling to guns and religion” remark from 2008 (emphasis mine):

Having been to Trump rallies, I find it difficult to believe half the crowd feels that way. Certainly there are quite a few Americans I talked to who expressed the opposite of these sentiments. The alt-right movement, while it has been very noisy and many have said they do support Donald Trump, it is not necessarily a group that’s large enough to give you close to 50% in some of these national polls.

There are a few problems with this, aside from the glaringly obvious fact that Trump says worse than this while he’s ordering a Denver omelet every morning, chief among them that Hunt is judging Hillary’s statement based on a false metric (she said about “half” of Trump’s supporters, which would be about 23% in national polls, not “close to 50%”), and that she’s testing the statement based on people she’s spoken to herself.

You know, just to be grossly generalistic, you could put half of Trump’s supporters into what I call the basket of deplorables. They’re racist, sexist, homophobic, xenophobic, Islamaphobic — you name it. And unfortunately there are people like that. And he has lifted them up. He has given voice to their websites that used to only have 11,000 people – now have 11 million. He tweets and retweets their offensive, hateful, mean-spirited rhetoric.

Now, those might not be the nicest things for Kasie Hunt to have to hear about the Americans she’s spoken to, but they’re also what we in the biz call “facts.” According to polling that’s been conducted throughout this race, Hillary is being generous, because poll after poll has shown that huge majorities of Trump supporters overwhelmingly hold racist, xenophobic, Islamophobic views. That’s just science.

Breitbart.com itself broadly backs up Hillary’s claim about their record traffic, even though she actually grossly underestimated their current Trump-fueled traffic, and Trump has repeatedly retweeted white supremacists, and the RNC even posted one on their convention Jumbotron!

If this is any indication, though, Hillary’s completely true statement will now be weighed by the mainstream media as equal to every other thing Donald Trump has ever said.