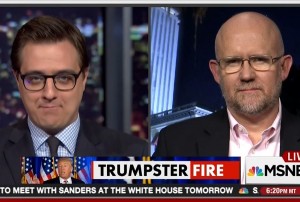 Seriously, though, what in holy Hell is going on at MSNBC? After spending Tuesday night fretting about overt racist Donald Trump‘s manners and Teleprompter delivery, the network’s talent finally got back around to discussing Trump’s racism with the keen insight of a bag of rocks Wednesday night.

Was it a surprise that Rick Wilson, one of the righty analysts the network is pimping in their new Lean Whoreward™ campaign, decided to make a point about Donald Trump’s racism by doing a racially caricatured impression of Ike Turner that also not only made light of domestic violence, but posited it as a way of teaching a lesson? No. As Mediaite editor Lindsey Ellefson noted in a piece about something else terrible that Wilson said Monday night, Rick Wilson is The Worst.

What was surprising was All In host Chris Hayes laughing along with it:

I think what’s terrifying the party leadership, he’s like the Ike Turner of the Republican Party now. He’s like “I love you, Tina. I had to slap you to teach a lesson.” This is a guy that terrifies these people and Paul Ryan, who is a wonderful and brilliant thinker who I admire, needs to tear the band aid off and said this guy is unacceptable and he’s not qualified to be president or our nominee, and we’re done. Reince Priebus needs to man up and say to Donald Trump “You may have the delegates but you don’t have the moral standing to represent our party in this country, and we’re done.” It’s going to be tough and these guys are going to take more beatings before the lesson sinks in…

I’d love to hear Chris Hayes explain to his daughter what’s so funny about that Ike Turner joke.

MSNBC has nearly completed the long process of whitening and rightening its weekdays, and it seems this new milieu has taken a toll on the network’s liberal talent, who no longer seem to realize the pot they’re sitting in has come to a boil. It’s no coincidence that Trump has risen in the meantime to completely reset the racist misogynist horizon to the point where Rick Wilson is their go-to guy to rebut it with slightly less-overt racism and misogyny.