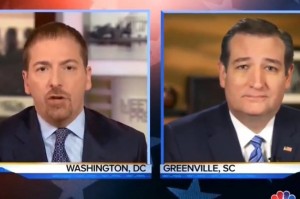 On Sunday, Mediaite reported that Meet the Press moderator Chuck Todd muttered something that sounded like “Oh, God” when Sen. Ted Cruz made the observation that recently-deceased Supreme Court Justice Antonin Scalia‘s tenure on the court was analogous to Ronald Reagan‘s as president. Since then, we have enhanced the audio to give a better idea of what Todd said:

CRUZ: And, Chuck, just as Ronald Reagan was to the Presidency, so Antonin Scalia was to the Supreme Court. He had that big an impact.

CRUZ: And I think his passing yesterday really underscores the stakes of this election.

To me, it sounds like Todd is saying “no doubt,” but there’s a larger consensus around “Oh, God,” and in the latter’s favor is the fact that no one from NBC or MSNBC has reached out to refute the reporting, and yet they definitely appear to have noticed it. Since we repoted on it, MSNBC has re-aired the clip, and only now, they have scrubbed Todd’s aside from the conversation. Here’s how it appeared on Monday morning:

CRUZ: And, Chuck, just as Ronald Reagan was to the Presidency, so Antonin Scalia was to the Supreme Court. He had that big an impact. And I think his passing yesterday really underscores the stakes of this election.

This revision could mean one of several things. If he said “Oh, God,” the network might have feared backlash against Todd from conservatives accusing him of bias against Cruz and/or Ronald Reagan, or if the quote was “no doubt,” from liberals enraged at Todd agreeing with Cruz. It’s also quite possible that Chuck Todd was reacting to something else offscreen, completely unrelated to what Cruz was saying.

No matter what, though, the point is that MSNBC shouldn’t be stealth-scrubbing its video in any case. Meet the Press is a news program, not some George Lucas trilogy you can just go back and mess with constantly. If Han shot first, then Han shot first, and if Chuck Todd said “Oh, God,” or “No doubt,” or whatever he said, that should stay in unless someone wants to explain taking it out.