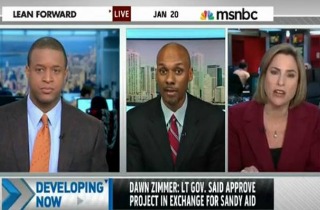 A Monday afternoon panel discussion between Republican and Democratic strategists got heated over whether it was fair to assume that the allegations made by Hoboken Mayor Dawn Zimmer, that New Jersey Gov. Chris Christie’s office sought to withhold Hurricane Sandy aid unless she approved a local development project, were truthful.

“Does the U.S. Attorney’s involvement in this latest charge, does it diminish the idea that this is a partisan affair?” MSNBC anchor Craig Melvin asked.

“No,” GOP strategist Susan Del Percio said. “I actually think she’s shown a great deal of false sincerity.” She added that the evidence that Zimmer has provided to substantiate her claim is, on its face, too thin to implicate Christie’s office in a concrete ethics violation.

“If she was so concerned about this and it was such a moral question to her, she should never have allowed Governor Chris Christie to be reelected,” Del Percio said.

Democratic strategist Keith Boykin said he was shocked that Del Percio would be “doubling down” on the defense of Christie. He said that allegations raised by a number of New Jersey mayors and Christie’s decision to move the special Senate election of Sen. Cory Booker (D-NJ) amounts to a “history of intimidation.”

Boykin said that Zimmer committed a crime by lying to a U.S. attorney if she is not telling the truth. Del Percio shot back that no one knows whether Zimmer was under oath when she spoke confidentially to the U.S. attorney.