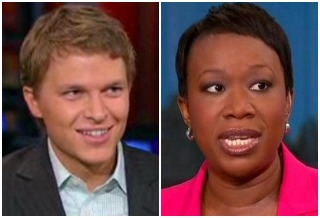 Two weeks after CNN is set to launch its new daytime schedule, MSNBC will be making some major changes of its own, complete with new shows from Ronan Farrow and Joy Reid. Starting February 24th, the network will start airing its brand new lineup.

The weekday show show MSNBC promised from Farrow last year still does not have a name, but it does have a time slot. The show will air at 1pm ET daily, currently occupied by Andrea Mitchell Reports. The 2pm ET hour where NewsNation with Tamron Hall currently airs will go to an also as-yet-unnamed show from Joy Reid, who Mediaite predicted would be the next MSNBC contributor to get her own show. She was considered a strong contender to take over for Martin Bashir before MSNBC gave that 4pm slot to Wagner.

Andrea Mitchell and Tamron Hall’s respective shows are remaining on the air, but moving earlier to make way for the new talent. Hall will move to 11am ET, where Thomas Roberts used to be before he got transferred to Way Too Early, while Mitchell will be at 12 noon ET, where Wagner was before her move.

“Tamron has established herself as one of the best news anchors in the business. It strengthens us to have her hosting during our morning news block,” MSNBC president Phil Griffin said in a press release. “Andrea Mitchell is so critical to msnbc and I’ve always thought her show should be at noon. Andrea brings on the biggest newsmakers of the day and the new time slot will help showcase her work.”

“One of the highlights of this job is finding new talent,” he added. “Ronan and Joy are two of the most thoughtful and impressive journalists out there and I’m excited for what they will bring to the afternoon.”

Below is the new complete daytime schedule, beginning February 24th:

9 AM – The Daily Rundown with Chuck Todd

11 AM – NewsNation with Tamron Hall