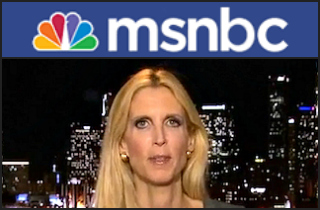 A common perception is Ann Coulter works for Fox News. She doesn’t. The fact is, she’s a free agent and can appear on any network she chooses.

It’s why we see her on Fox’s Hannity or Gutfeld’s Red Eye one minute and across the desk from CNN’s Piers Morgan the next. Coulter isn’t afraid of a fight (she relishes it), which is why HBO’s Bill Maher is also on her dance card.

Meanwhile over at MSNBC, the network recently announced a string of new programs and hosts from Ronan Farrow (1:00 PM) to Joy-Ann Reid (2:00 PM) to Alex Wagner (4:00 PM). Left-leaning is a generous way to describe each anchor: Farrow once worked for the Obama Administration. In 2008, Joy-Ann Reid worked on South Florida urban media outreach for the Barack Obama presidential campaign (according to her bio). Alex Wagner—who won’t be invited to speak at CPAC anytime soon–is currently engaged to White House chef Sam Kass.

The result is MSNBC’s dayside programming from 1:00 PM-on has now fully completed its shift from news to opinion. Not a surprise, considering (A) The Pew Research Study last year that shows the network is already 85 percent opinion (with Fox at 54 percent and CNN at 46), and (B) MSNBC President Phil Griffin’s proclamation that his channel isn’t the place for breaking news, despite having the ample resources of NBC News at his disposal.

So here’s what the new MSNBC lineup will look like:

Repetition is the only word that comes to mind here. Note: That’s not a knock on the ideological brand MSNBC is providing its viewers by giving them what they come to the channel for — validation of beliefs. The network is what it is in an increasingly polarized medium.

Upon being named as host of the 2:00 PM hour, Joy-Ann Reid recently did an interview with Mediaite’s Tommy Christopher and spoke about a desire for different voices on her show:

“I’m not on there to do an hour of why Republicans suck, I don’t think I have to do that, I think what MSNBC does really well is to have a really smart conversation both with the left, and the right.”

That said, if Griffin is looking to bring out the best in his hosts by providing a strong opposing voice, a conservative foil to challenge them while offering the smart conversations Reid is referring to, he would be wise to add Ann Coulter as a contributor (which would make her exclusive to the network).

Diversity is something the network preaches constantly (while sometimes mocking it), but diversity isn’t just about color, it can pertain to political views as well.

Carville—as a guest—appeared regularly this past month on Fox primetime show such as The O’Reilly Factor and The Kelly File…perhaps as an audition to see what the chemistry was like, perhaps as a way to introduce Carville to the Fox audience. Kohn has co-hosted Crossfire and has appeared across the CNN dial from dayside to primetime.

MSNBC has made no such move. And if it wants to avoid being an echo of an echo chamber, it still needs to do more than add more progressive voices. With Coulter—it would not only get an established brand name, but a skilled debater and someone who possesses something few talking heads can offer: A biting—oftentimes controversial—sense of humor.

So when can we expect to see on MSNBC the pundit Keith Olbermann once referred to as Coultergeist?

For starters, there would be an open revolt. It wouldn’t be surprising if Ed Schultz actually did torch the place, as has been proposed in the past. Lawrence O’Donnell—who has debated Coulter in public forums in the past, albeit not on television—might or might not be crazy about the idea either…especially after she sent out this tweet last year:

@Lawrence is a complete pussy. he's play my clips from other shows, but is too afraid to have me on live!

MSNBC’s current audience would never stand for it as well. Or would they…at least privately?

It would be reminiscent of the Howard Stern effect, as explained in the movie Private Parts when Pig Vomit (Paul Giamatti) is reviewing the latest ratings book (which shows Howard gaining a huge amount of listeners) with an audience researcher:

Pig Vomit: How can that be?

Researcher: Answer most commonly given? “I want to see what he’ll say next.”

Pig Vomit: Okay, fine. But what about the people who hate Stern?

Researcher: Most common answer? “I want to see what he’ll say next.”

That’s Coulter to MSNBC’s audience. Sure, the talent won’t like it. And of course, the audience will decimate her on social media and comment sections like the one below. But in the words of James Earl Jones in Field of Dreams: “People will come. They’ll most definitely come.” And they’ll stay to hear what she’ll say next. The potential for an MSNBC segment to go viral will increase tenfold over the daily Chris Matthews’ Republicans-are-evil rant (with two guests always shaking their heads in agreement).

Except for one minor detail.

It will never, ever happen.