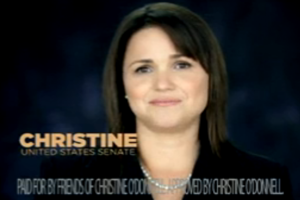 The jury is in on the Delaware Non-Witch Trial, and Christine O’Donnell has been found not guilty of being a witch, or a Senator. However, as the molten cauldron of media coverage attests, she still casts a powerful spell. While Fox News isn’t stepping up to the plate, this freshly-minted era of divided government creates the perfect opportunity to capitalize on O’Donnell’s most winning qualities by pairing her with the right lefty host. It would be a bold move, a forward-leaning move, for a network like MSNBC.

CNN had the right idea with Parker/Spitzer: a lefty/righty one-stop shop, without all the bitter conflict of the Crossfire model. Unfortunately, they muffed the execution. As Ed Rendell‘s recent jaw-dropper demonstrates, there’s a low hum of creepy to the whole thing, and since endorsing Obama in 2008, Kathleen Parker isn’t such a draw for conservative audiences.

O’Donnell, on the other hand, has movement street-cred to spare, along with an ability to get along with the other side. Bill Maher‘s roundup of O’Donnell’s Politically Incorrect clips demonstrates that she holds up well even against the most strident opposition, mainly because she has a sense of humor about herself.

Her sex appeal, of course, doesn’t hurt. The irony of O’Donnell’s anti-masturbation stance isn’t likely lost on a large portion of the conservative audience (and maybe the liberal one, too), who probably felt a twinge of Rich Lowry-esque deja vu when O’Donnell punctuated her concession speech by saying “We’ve got the room all night.”

The right co-anchor could enhance those qualities. The problem is, established liberal personalities like Ed Schultz already have their own shows, and an abrasiveness that wouldn’t mesh well with O’Donnell. A notable exception, though, is recent MSNBC bench acquisition Cenk Uygur.

Uygur’s liberal bona fides, like O’Donnell’s conservative ones, are undeniable, but he also has shown an ability to play nice with the other side. A former conservative himself, there’s ample opportunity for he and O’Donnell to find something approaching common ground, or at least a common frame of reference. Also, despite a long, deep footprint in the progressive community, Uygur is the anti-wonk, maintaining the outsider-y perspective that echoes O’Donnell’s, and this year’s midterm voter’s.

There’s no question that MSNBC has cornered the market on the lefty share of the cable news pie, but creating a spot for Christine O’Donnell would offer the network a rare opportunity to cut into Fox News’ audience. MSNBC’s 7pm timeslot currently features a Hardball rerun that beats the non-Fox competition, but still finishes a distant second to Fox. An O’Donnell-led hour could easily put the network neck-and-neck at 7, and bring a fresh set of eyeballs in the bargain.