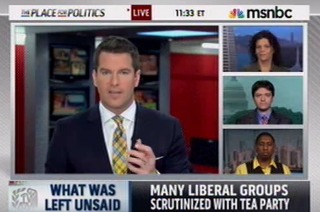 Is it possible that the right-leaning Tea Party was being forced to reconcile onerous information requests from the Internal Revenue Service because former IRS Commissioner Douglas Shulman, who was appointed by President George W. Bush, thought the nascent conservative movement reflected poorly on the Republican Party? This is the theory that was posited on MSNBC on Monday in an effort to explain the IRS’ admission that they had singled out conservative groups for undue scrutiny.

“Is it really the interesting part here that Shulman, who was a Bush appointee, might have been looking at Tea Party groups because of what it might have done to the Republican Party at the time – in the future of what we’re seeing now; basically, splintering the foundation of the Republican side?” MSNBC anchor Thomas Roberts asked?

Mother Jones reporter Monika Bauerlein declined to respond to that speculation, but noted that when a group seeks tax-exempt status, they are asking for “a subsidy from the tax payers.”

“These Tea Party groups were looking for a subsidy from the tax payers, and there were a lot of these groups springing up at the time,” Bauerlein added. She contends that, in the wake of the Citizens United decision, there was a flood of applications to the IRS seeking tax-exempt status as a 501(c)3 – 6 organization. In fact, the number of applications for that status declined in 2010 in the wake the decision.

The Mother Jones reporter is quick to decry political discrimination, noting that her organization faced undue scrutiny under the administration of President Ronald Reagan, it is wrong for the government to blindly approve applications for groups who are “seeking something from the rest of us, essentially.”

Leave aside the fact that there is clearly room for philosophical disagreement over the assertion that charities which are not subject to taxation in order to operate are asking for a “subsidy” or are “seeking something from the rest of us.” That assertion is certainly debatable.

Focusing instead on MSNBC’s postulation, that a conservative had insurgent conservative groups in order to strangle the infant Tea Party baby in its crib, it is worth noting that the network immediately proceeded to counter its anchor’s own theory. While Roberts speculated that a Republican was guilty of targeting Republicans, MSNBC ran the chyron, “Many Liberal Groups Scrutinized With Tea Party.”

Wait… so which is it? Either the undue scrutiny was uniformly distributed across all political persuasions and the IRS only preemptively apologized for targeting conservatives because they are, perhaps, overly cautious, or a Republican was guilty of scrutinizing conservatives to scuttle the Tea Party movement. It is unclear how both of those things can be true simultaneously.

But the whirlwind speed of the arguments from the left intended to support the actions of the IRS in this scandal are inherently difficult to keep up with. The logic does not need to be especially sound so long as it exonerates the discriminatory behavior exhibited by federal officials.