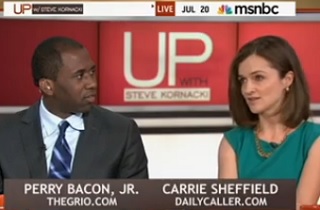 On Tuesday morning, after invoking the smear that President Obama was once a “proponent” of Stand Your Ground laws, Morning Joe co-host Mika Brzezinski also dropped the conservative lie that Florida’s Stand Your Ground law is “benefiting” minorities in Florida. That wasn’t, however, the first time the lie was told on MSNBC’s air, as Saturday’s Up with Steve Kornacki featured the claim, narrowed to “African-Americans,” from The Daily Caller‘s Carrie Sheffield. During a panel discussion on President Obama’s remarks about the killing of Trayvon Martin, Sheffield noted that “Stand Your Ground in Florida actually benefits African-Americans greatly.”

“They do invoke it,” she continued, “they successfully use it to protect them…”

Host Steve Kornacki took a stab at qualifying the claim, saying “There are clear disparities between who is able to have the Stand Your Ground defense accepted, it’s accepted a lot more…”

Credit Kornacki for at least trying, but as it turns out, there isn’t a significant racial disparity between who successfully uses the Stand Your Ground defense, and what little disparity there is actually is tilted in favor of black shooters. What Kornacki should have said was “What kind of sick freak says that a law that’s used to justify killing black people is a benefit to black people?”

Sheffield’s claim is based on a Daily Caller report entitled “Blacks benefit from Florida ‘Stand Your Ground’ law at disproportionate rate,” and rests that claim on their analysis that “Black Floridians have made about a third of the state’s total “Stand Your Ground” claims in homicide cases, a rate nearly double the black percentage of Florida’s population. The majority of those claims have been successful, a success rate that exceeds that for Florida whites.”

The obvious problem with that claim is that all of those successful Stand Your Ground defenses came at the expense of other people’s lives, an obvious flaw that could have been sussed out even without reading the Daily Caller piece. Politicususa blogger Keith Brekhus did do the required reading:

Despite facts to the contrary, this sick claim has now been put out by MSNBC twice, and in egregious fashion. In the case of Morning Joe, which actually has some credibility on the issue by virtue of host Joe Scarborough‘s productive comments about the profiling of Trayvon Martin, this bogus narrative has now been blasted to the entirety of the Washington press, and political establishment.

Up has a different audience, though, one that is presumably younger and smarter than average, members of which likely heard Sheffield’s ridiculous claim and checked on it. MSNBC also has a huge black audience (or at least, they did), and while the idea that Stand Your Ground is a benefit to black people is insulting to their entire audience, it is doubly so to black people.

Adding injury to insult, though, was the show’s decision to book someone from The Daily Caller to do a segment on Trayvon Martin, for a purpose other than grilling them on that site’s relentless campaign against Trayvon Martin. While many conservative outlets have done their part to prop up George Zimmerman, The Daily Caller set itself apart from the beginning, and became the McDonald’s of Trayvon-Bashing.

While they were a little bit late to the story (mainstream cable channels began reporting on the story on March 13, but the story broke wide open with the release of the 911 tapes on March 16. Fox News ran its first Trayvon segment on March 19), their priorities were clear from the start. The first story listed under The Daily Caller’s Trayvon Martin tag was a March 22 column defending white culture:

So let me get this straight. An overzealous neighborhood watchman of Hispanic descent shoots an unarmed black kid, and white culture is to blame? That seemed to be the argument in Michael Skolnik’s opportunistic, perversely reasoned, poorly written viral column about the death of Florida teen Trayvon Martin. Then CNN and MSNBC happily picked up the thread and sped the argument forthwith to Crazyland.

Now that Trayvon Martin had their attention, The DC quickly distilled the voice of Trayvon Martin’s millions of supporters: the dozens-strong New Black Panther Party. The next day, they ran a story that implied that President Obama commented on Trayvon Martin’s killing because of pressure from that same group, but have since thought better of it, apparently, editing the piece to make it less race-baitey.

Here are some of the headlines from the 45 articles The Daily Caller aggregated under their Trayvon Martin tag in their first 10 days of covering the story. You can see them all for yourself, but these are pretty well representative:

* After days of tension, all quiet in Sanford on Saturday

* Is momentum in Trayvon Martin case swinging toward George Zimmerman?

* Kurtz: MSNBC should crack down on Sharpton’s activism, not allow him to organize political rallies

* Police: Zimmerman says Trayvon decked him with one blow, then began hammering his head

* Ron Paul on Trayvon Martin Case: Not ‘going to be a slam dunk’

As you can see, The Daily Caller was very thorough when it comes to covering Al Sharpton riling up black people, or Jesse Jackson showing up late, or President Obama being a bad, bad man, or George Zimmerman telling his side of the story and gaining “momentum.” They were so thorough that they even managed to work communists and Father Pfleger(!!!) into their coverage, and obtain the expert legal opinion of Rep. Ron Paul (R-TX). They’ve also been very thorough about conducting an internet grave-robbing, posting two rounds of tweets from the slain teenager’s closed Twitter accounts.

It’s hard to imagine anyone who cares about the Trayvon Martin case watching Saturday’s Up, and not wondering what Sheffield was doing there. They might as well have booked Robert Zimmerman, Jr. to offer advice on the Martin family’s social media strategy.

I’ve long been a proponent of point-of-view news programming, but as valuable as Leaning Forward can be, it’s more important that the shows are sharp. I sincerely appreciate Joe Scarborough’s comments on racial profiling, but valuable points of view are undermined when false or misleading ” facts”  are permitted to muddy the waters.