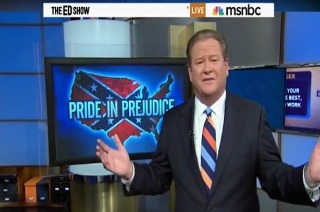 Upon his return to weekdays, MSNBC host Ed Schultz demonstrated what his news network has become by taking the racial vitriol to a yet-unseen level. After making a detailed case on Tuesday about efforts underway in America to reintroduce racial segregation, take away the constitutional rights of African-Americans, and reinvigorate prejudice, Schultz was confronted by a viewer who was moved to ask if the Republican Party is trying to foment “a race war.” Uncomfortable by the results of his own actions, Schultz said that the media has a duty to “tone things down” when they get too heated.

Schultz began his Tuesday program by launching into a tirade about how Republicans, and conservatives in general, are actively attempting to restore segregationist policies in the U.S.

He cites, as examples, a disturbing but isolated episode in which a black family was denied service at a restaurant, a neo-Nazi group’s plan for a whites-only camp in South Dakota, and the “spewing of hate” from conservative talk radio in the South.

After plastering a Confederate flag across a map of the lower 48 states, Schultz launched into a tirade – fuming with rage – about how the rights of African-Americans were “under attack” virtually everywhere.

Upon returning from a break, a viewer asked a natural question of Schultz: “Do you think some on the right are itching for a race war in this country?” the viewer asked.

Shultz, suddenly made uncomfortable by the fruits of his irresponsible agitation, pulled back. “I think we in the media have a responsibility to tone things down when it gets hot, if you know what I mean,” he said.

No, we don’t know what you mean. No, all is not forgiven.

Schultz’s incitement yielded its intended results. He promoted fear and hatred, but he suddenly becomes a responsible broadcaster when he is directly confronted with the obvious results of his activism? No.

This was not the work of a responsible broadcaster. It might have been nice if Shultz had decided it was appropriate to “tone things down” before he hurled the bloody tunic of segregation into his crowd of aggrieved viewers.

A sitting United States Senator appeared on this program just 24-hours ago. What a shameful venue for a member of such an august body.

“Irresponsible” does not go far enough to describe this broadcast. It is very nearly “dangerous.”