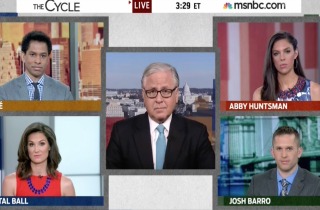 Former Bush advisor Karl Rove recently engaged in a bit of tasteless speculation regarding just how fit former Secretary of State Hillary Clinton is to run for president in 2016. His commentary, centering on the former first lady’s mental fitness after suffering a debilitating fall in 2012, was impolitic and discourteous. But any layman can see that. It takes an analyst on MSNBC to unearth the sexism and conspiracy mongering in Rove’s commentary.

“So, Karl Rove there, basically calling for Hillary’s health records,” MSNBC host Krystal Ball opined on Tuesday. “Is that going to be the 2016 equivalent of calling for Obama’s birth certificate?”

Huffington Post editorial director Howard Fineman agreed and noted that Clinton’s health records could be one of a handful of “personal details that she’s not going to want to talk about.”

“The whole Republican strategy is to make this all so distasteful to Hillary that she’s going to look at it and say, ‘I don’t want to run, it’s too dirty, it’s too nasty.’” Fineman conjectured. “I think that’s vaguely sexist because I don’t think you would say that about any man that you are going to scare him out of the race because he is not tough enough.”

If calling for a presidential candidate’s medical records is beyond the pale and exceeds the level of stress which the candidate should be expected to handle, they had better not declare a candidacy. Why? Because, as all of these analysts ardently protecting Clinton’s honor know full well, that is a routine feature of modern presidential campaigns.

In October, 2008, a full-page ad in the New York Times demanded Sen. John McCain (R-AZ) release his medical records. Like most candidates before him, the then 71-year-old cancer survivor had released them to the press but asked that they be kept private. He was subject to withering criticism from the left for not releasing his full records to the public. Fortunately for the press, McCain was a Republican. Otherwise, such behavior would have been deemed “ageist.”

President Barack Obama was also asked repeatedly to disclose his medical records. In May of 2008, the Obama campaign released a one-page letter from Obama’s Chicago physician which noted that the candidate had a cholesterol level of 173 and was previously treated for “upper respiratory infections, skin rashes and minor injuries.” To ask for more than that, which many did, was no doubt “racist.”

Under pressure in 2012, both former Massachusetts Gov. Mitt Romney and Rep. Paul Ryan (R-WI) released their full medical records in which we learned that Romney suffered from an enlarged prostate and Ryan occasionally used an inhaler.

They did so at the request of both the media and President Obama himself. Amid a campaign aimed at forcing Romney to release his income tax filings, Obama said in August of 2012 that this level of disclosure was simply “playing by the same set of rules” as everyone else.

“I’m not asking to disclose every detail of his medical records, although we normally do that as well,” Obama said in the White House to the laughs of the assembled members of the press. “This isn’t overly personal here, guys. This pretty standard stuff. I do not think we are being mean to ask him to do what every other presidential candidate has done.”

No doubt, Obama was displaying a latent antipathy toward Mormons.

Karl Rove’s attack on Clinton was ill-advised, but the Pavlovian response on MSNBC to any criticism of a Democrat as a naked display of racial or gender-based superiority is beyond nauseating. It would be more forgivable if these professional political analysts did not know they were intentionally misleading their audience. But they do. At least, they ought to.