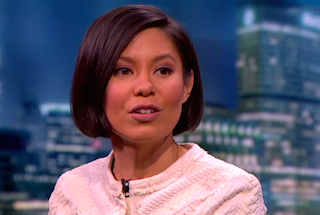 When a comedy program like The Nightly Show attempts to take on a serious topic like the death penalty, things are not always going to go smoothly. Larry Wilmore dedicated his Tuesday night panel to the topic of Boston Marthan bomber Dzhokhar Tsarnaev’s fate, but only one of his panelists, MSNBC’s Alex Wagner, had anything constructive to offer in opposition to calls for the convicted murderer’s head.

“I think there are certain people that just need to die,” Wilmore said at the top of the segment. “I have no problem with Tsarnaev getting executed.”

Wagner was the only one who came out against the death penalty on moral grounds, saying, “I just don’t think we should be putting people to death to show that murder is wrong.” She said that life in prison with potentially 23 hours per day in solitary confinement is a more than satisfactory punishment.

The MSNBC host appeared to grow increasingly more frustrated with the conversation as Soder made suggestions like letting Tsarnaev out so some vigilante can shoot him. “These are without a doubt very creative solutions,” she said, reluctantly giving Wilmore a fist bump and delivering an epic eye-roll to end the segment:

After a commercial break, Wagner was gone, replaced by a random woman from the audience who happily participated in Wilmore’s “cool and unusual” game. He would only say that Wagner “had to run.”

We reached out to Comedy Central for clarification on why Wagner left before the final segment and spokesperson told us that it was “established prior to the taping” that she “would only participate in the first panel segment.” A source with MSNBC confirmed that same.

But still, it was notable that Wilmore did not inform his audience of that fact at any point during the segment and implied that the decision to bring on a member of the audience to take her place was made last minute. The whole thing seemed far more hasty than planned.

Watch videos below, via Comedy Central: