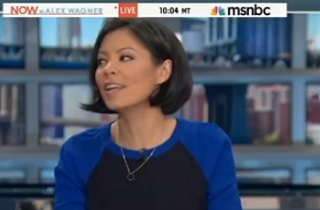 A great political pundit once said “Love means never having to say you’re sorry,” a maxim that is currently playing out with progressives who split with President Obama on responding to Syria’s use of chemical weapons, and are working their way back to him now that his response appears to be working out. On Tuesday’s Now, host Alex Wagner described the President’s recent foreign policy as “flailing,” but that it may “turn a corner” with progress on Iran diplomacy. NBC News Political Director Chuck Todd put things in proper perspective.

Referencing a recent near-mea culpa from Obama administration critic Jeffrey Goldberg, in which he provisionally credits progress in Syria to President Obama’s threat of force, Wagner said that “the fact is that for the last couple of weeks, we have all been focused on, I think, a rather flailing foreign policy. The fact that the President has been able to turn a corner, potentially, at the United Nations with his possible handshake with the Iranian president is a pretty dramatic change of events.”

Chuck Todd agreed on the magnitude of the shift. “Think about where we were three weeks ago, and think about what the speech would have looked like had a vote gone differently in the UK parliament, had the President not decided to go to Congress,” he said. “It is amazing.”

He added that “this is what the White House has been pleading, to folks like Jeffrey and others who have been sort of scratching their heads, or critical of how they have handled this tactically, saying, ‘Hey, judge us by the results.”

Chuck also pointed out that the President’s possible diplomacy with Iran is an extension of the foreign policy that he laid out each time he ran for the presidency. “But you’re right, a handshake with Iran? The fact that Syria agreed to inventory its chemical weapons?” Todd said. “That in itself, is an amazing step that’s something I read in the Israeli press, the Israeli press, Hebrew press, so the more conservative part of the press, saying if you said three years ago this was going to happen, Netanyahu would have said you’re crazy.”

It would be tough to convince anyone that President Obama’s plan, all along, was to have Bashar al-Asad suddenly give up his chemical weapons, but as Goldberg correctly assesses, that potential resolution was all Obama’s doing:

On Syria, Obama’s record is disturbing in many ways. He indicated that he would attack the regime as punishment for crossing the “red line” he drew on the use of chemical weapons, but he flinched when the moment came to launch a strike. He has at times seemed disorganized and hesitant, and his critics — including me — saw him as vacillating.

Yet Assad, and his Russian sponsor, Vladimir Putin, both weighed the situation and came to the conclusion that the U.S. meant what it said. It is for this reason — and this reason alone — that Putin and Assad have agreed in principle to arrange for the removal of chemical weapons. Without Obama’s threat, the Assad regime would still be free to gas its people.

I don’t like the administration’s Syria policy — I wish it would work harder to remove the men who use chemical weapons, not just the weapons themselves, and I have almost no hope that the Putin-led plan will work — but Obama has managed, by threatening force, to buttress the international taboo on the use of poison gas. Again, this is a provisional and morally ambiguous victory, and it could easily come undone. But it was only Obama who forced what looks like modest progress on one core issue of the conflict.

What Goldberg saw as “vacillating,” and Wagner saw as “flailing,” the President’s sudden decision to go to Congress, the “muddled messaging,” so far has worked out, and even if this wasn’t exactly the plan, it doesn’t mean this was all a happy accident. The President made his threat of force, then allowed it to breathe long enough to see what effect it would have on the state of play. While American critics saw this as hedging, the President was sending the message, to Assad and Putin, that he was prepared to attack Syria even without Congress’ authorization, consistently reserving that authority. What began as a smooth call to see if his cards would improve ended up with Putin and Assad mucking their hands.