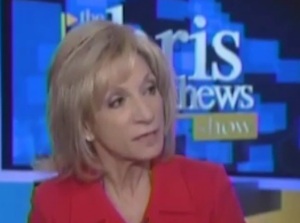 Appearing on The Chris Matthews Show, in a discussion on the upcoming Florida primary, Andrea Mitchell claimed that Mitt Romney‘s relatives entered the United States illegally.

“And looking ahead to the next primary in Florida, 30 percent of the Hispanic community is Cuban-American. That’s a smaller proportion, and so the Hispanic community there is different. And they are less prone to be susceptible to Mitt Romney’s really hard line on immigration, more prone to the Newt Gingrich approach to immigration,” Mitchell observed. “The other interesting little fact is about the Mexican Romneys, those looking back at all of those records say that Mitt Romney should look back at the records because the Romneys that came back from Mexico to the United States, they crossed the border illegally.”

Mitchell’s remarks left conservative columnist Kathleen Parker in stunned silence. “Well, you may have one-upped me on that one, Andrea!” Parker exclaimed incredulously.

As Newsbusters’ Noel Sheppard notes, it was unclear where Mitchell was basing this claim. Romney’s Mexican roots have been widely reported; this morning, NPR wrote a story about Romney’s Mexican family, but didn’t explore whether his ancestors were documented citizens.

According to NPR’s John Burnett:

In 1912, the Mormons fled their colonies in Mexico to escape the violence of the Mexican revolution.

Miles Park Romney begat Gaskell Romney, who begat George Romney. George — who was never a Mexican citizen — was 5 years old when the family left Mexico. He went on to be an auto executive, governor of Michigan, and a presidential candidate. George begat Mitt, who was born in Detroit.

Most of the Mormons never went back to Mexico. But one of Miles Park’s sons, Miles Archibold, did return. And it is his progeny who remain here today, Mitt’s second cousins.

UPDATE: Burnett told Mediaite he did not come across any documents indicating the Gaskell Romney family came to the US illegally, noting they were part of an exodus of 1,200 Mormons from Mexico.

Romney’s great-grandfather, Miles Park Romney, fled the United States and crossed into Mexico in 1885 to escape religious persecution. He helped build the Mormon enclave of Colonia Juarez in Chihuahua.

Miles Park Romney never became a Mexican citizen, and neither did his son, Gaskell, or grandson, George. They were all denied Mexican citizenship because statutes on the books in Mexico denied that right to American settlers and their offspring.

Watch via The Chris Matthews Show: