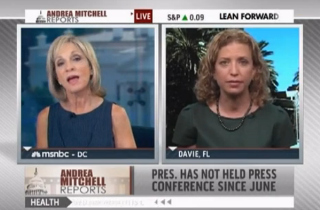 Mitchell mentioned to the congresswoman that President Obama has not held a formal news conference since March 6th, and bemoaned his lack of “accessibility” by playing a snippet of a local radio interview the president did, in which the hosts asked a non-political question about whether he prefers the color red or green.

“This is right after doing Entertainment Tonight,” Mitchell complained. “I know what the White House is saying, ‘Well, he does interviews all the time with local. … Doing this kind of radio interview occasionally is fine, I’m sure, but what about answering the really tough questions that experienced political journalists who cover him all the time, who are members of the White House press corps, are going to ask him?”

“It’s important for local reporters to be able to get a chance to ask him questions beyond how good the local food is,” Wasserman Schultz replied.

“Sure, but it shouldn’t be a replacement,” Mitchell interrupted, “for a national press conference, which we could all put on the air and share with all the viewers around the country.”

“Not lately,” muttered Mitchell in response.

“I know,” the Florida congresswoman responded. “You will have an opportunity for sure.”