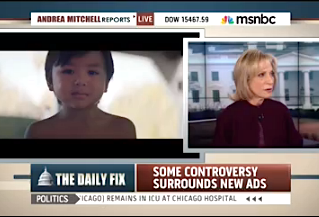 Coca-Cola’s Super Bowl ad took a bit of a beating on Twitter last night, with people who found its multilingual version of “America the Beautiful” to be offensive threatening to #BoycottCoke in response. Most of them did not even seem to notice that the ad featured the first gay family in Super Bowl history. Monday afternoon, MSNBC’s Andrea Mitchell and her panel analyzed the backlash while defending the ad as “beautiful” and asking, “what’s the deal” with people who hated it so much?

“This is a melting pot,” Mitchell said after showing a few of the tweets attacking the sentiment behind the ad. “I thought this was a beautiful commercial.”

“We are a nation of immigrants,” Washington Post columnist Ruth Marcus agreed. “Immigrants who started out in another language and learn English. I was watching the commercial and thought it was beautiful and got all misty over it.” She also commended conservatives like Erick Erickson for tweeting the following to people who were upset by it:

People were really upset about the Coke advertisement? Seriously?

Things did get a little awkward later in the segment when Marcus brought up the Cheerios commercial that caused so much controversy for MSNBC last week. “Could that girl in the Cheerios ad be any cuter? The little girl who got her puppy?” Marcus asked.

After a pause, Mitchell asked, “How about the Doritos ad?”