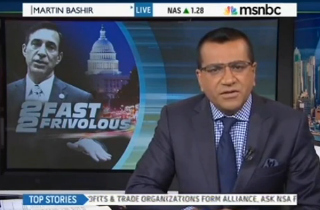 During this morning’s House Oversight Committee hearing on the IRS scandal, Rep. Darrell Issa (R-CA) likened his colleague Rep. Elijah Cummings (D-MD) to “a little boy whose hand has been caught in a cookie jar.” That has “repugnant” racial connotations, said MSNBC hosts Martin Bashir and Rachel Maddow.

Issa’s remark came after Cummings asserted that his Republican colleague has insinuated that the orders to give additional scrutiny to conservative 501(c)(3)’s came directly from the White House. Issa took umbrage with the comments, expressing his “shock” and then using a colorful simile to describe his colleague:

“I’m always shocked when the ranking member seems to want to say, like a little boy whose hand has been caught in a cookie jar, ‘What hand? What cookie?’ I’ve never said it leads to the White House.”

According to Bashir, Issa “failed to recognize how words matter” when he “redressed” by using the word “boy.”

“Not just a boy, a little boy. Look, Darrell Issa should know that putting the words, ‘boy,’ ‘little boy,’ in referencing them to a black man, is problematic. But when that black man is the ranking member on your committee, it’s beyond problematic. It’s myopic. It shows that Darrell Issa is not only out of touch in terms of what his committee should be doing, but shows he’s out of touch just generally, culturally.”

“Is Darrell Issa determined to become the most repugnant politician?” Bashir asked. “Or has he already achieved that feat?”

Bashir’s MSNBC colleague Rachel Maddow seems to share the disgust. Earlier in the day, she tweeted: “Surely we can all agree that Darrell Issa really truly ought to not be calling Rep. Elijah Cummings ‘boy.'”