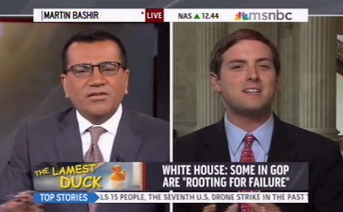 During Monday’s edition of MSNBC’s Martin Bashir, the eponymous host attempted to coerce reporter Luke Russert into agreeing with White House Press Secretary Jay Carney‘s talking points about whether Republicans are rooting for the Obama presidency to fail. When Russert refused to comply, Bashir became annoyed, interrupting the reporter by saying, “No. No. Luke, he’s right.”

Bashir said that “we sometimes see the White House say that there are those on Capitol Hill who are literally rooting for failure,” and then played a clip of Carney talking about that sentiment.

“I think that when you have a situation where action is not being taken on Capitol Hill — where it is obvious as outside economists will tell you what actions Congress could take to create jobs — there’s at least a failure to act,” Carney said in the soundbite.

“Very quickly, Luke. He’s right, isn’t he?” Bashir asked Russert, clearly hoping for the reporter to come out in total agreement with the White House.

Russert’s brow furrowed as he tried to answer in a diplomatic, journalistic fashion, saying, “It would seem that there is a desire on Capitol Hill not to allow the president…”

“Not to allow the president to look good in any capacity,” continued Russert, before being interrupted again by Bashir, who insisted, “Luke, a quick answer. A quick answer!” (Code for: I want you to agree with Carney one-hundred percent.)

To his credit, Russert smiled and persisted in trying to be somewhat neutral, saying, “The president has always done well when there’s a bipartisan deal — we saw it last year…”

“No,” interrupted Bashir yet again, clearly irritated with Russert’s seeming refusal to play along with Bashir’s stated views.

“When the president looks like a bipartisan leader, it helps his numbers. Republicans don’t want to let that happen. A biproduct of that is the economy is not functioning at the level it should be,” Russert said finally without interruption.

Frustrated and out of time, Bashir closed the segment saying, “Luke Russert, he’s right,” referring presumably yet again to his belief that Carney is absolutely correct.